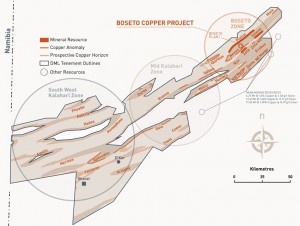 Discovery Metals Limited has reported its exploration results from the NE Mango 2 Prospect. The NE Mango 2 is within the company’s 100% owned prospecting licences in the Kalahari Copperbelt in north-west Botswana and is located approximately 30 kilometres from the Boseto concentrator.

The Mango Prospect is located in the Boseto Zone and is less than 25 kilometres away from the 100% owned Boseto Copper Project.

The Boseto Copper Project is being commissioned, with the first copper-silver concentrate produced in June 2012. Planned production is approximately 36,000 tonnes of copper and more than 1 million ounces of silver per annum over an initial evaluated mine life of 15 years.The drilling results reported in this release are from a deep hole drilled to test the extension of the NE Mango 2 deposit down-dip of the current Inferred Mineral Resources.

Hole MGDD3324 was drilled to test the continuity of mineralisation below the current Inferred Mineral Resources at NE Mango 2.

It intersected bornite-chalcopyrite mineralisation at a vertical depth of approximately 575 metres, or 325 metres below the previous deepest hole at NE Mango. Importantly for potential underground mining, a high-grade zone of copper mineralisation also shows good continuity between holes MGDD2421 and MGDD3324.