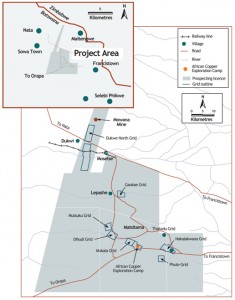 African Copper plc, the owners of Mowana copper mine in Botswana says it has narrowed its losses in the half year results for the period ending 30 September 2014. The company said revenues were $30.8 million, an increase of 3.7% from $29.7 million for the corresponding period last year. However it revealed that overall loss for the period was $8.8 million compared with a loss of $29.1 million for the corresponding period last year. This includes a $25 million impairment loss recognized last period on property, plant and equipment.

Operating income from mining operations was $4.0 million, a decrease of 39% from $6.5 million for the corresponding period last year, driven by increases in mining and transport activities at Thakadu to make up for previous shortfalls in mining and drilling activity.

Acting Chief Executive Officer and director of African Copper, Jordan Soko, said they were able to report improvements during this six month period in our key operating measures, however our mining and transport costs increased during the period as we needed to accelerate mining activities at Thakadu to make up previous shortfalls in mining and drilling activity.

“Nevertheless, we were very pleased with our ability to work with our new mining contractor in addressing and turning around the low delivery rate of Thakadu ore that we experienced under the previous contractor,” Soko said.

“This greatly enhances our strategic position as we move mining operations back to the larger Mowana open pit.”

The company said it continues to require the support of its parent company and principal shareholder, ZCI Limited (ZCI), and ZCI has agreed to defer all principal and interest payments arising from the Company’s debt obligations until 31 December 2015, and has confirmed it will continue to make sufficient financial resources available to African Copper, up to a maximum of $7 million to allow it to continue to meet its liabilities in the course of normal operations as they fall due. As part of this ZCI financial support the Company’s subsidiary Messina Copper (Botswana) (Pty) Ltd (Messina) received on 19 December 2014 additional financing from ZCI in the form of a term facility with a principal value of $2.5 million.

African Copper reported improvements in its key operating measures during the six month period ended 30 September 2014. The company produced copper in concentrate of 5,679 Mt, 15% higher than the corresponding period from last year owing primarily to a 25% increase in recoveries.

However, operating income from mining operations was $4.0 million, a decrease of 39% from $6.5 million for the corresponding period last year, driven primarily by increased mining and transport activities at Thakadu in an effort to make good on previous shortfalls in mining and drilling activity.

The acceleration in mining cost reflects our success, working with our new mining contractor, in addressing and turning around the low delivery rate of Thakadu ore we experienced under the previous contractor.

In March 2014, the company awarded a new long-term contract to provide hard-rock open cast mining services to Diesel Power Mining (Pty) Ltd (“Diesel Power”) a subsidiary of JSE listed Buildmax Limited (“Buildmax”). The contract commenced during February 2014 with a duration period of 52 months, with the first portion of the contract to be served in 2014 at the Thakadu Mine and the remaining months at the Mowana Mine.

This contract is of great strategic importance for the Company, as the Thakadu mine will largely be depleted during this financial year, with mining operations moving back to the larger Mowana open pit in the third quarter of fiscal 2015. This transition will require significant waste stripping to expose the necessary supergene and sulphide ores.