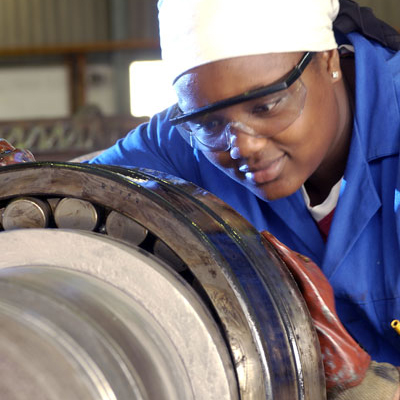 A worker at Namdeb (Pic By chamberofmines.org.na)

Nambia and De Beers have concluded a new 10 year sales agreement that is modeled on the similar one that Botswana agreed with the diamond major.

Announcing the deal, De Beers said the agreement provides for an independent sales outlet for the government of Namibia for 15 percent of Namdeb Holdings’ run of mine production, per annum, over the duration of the sales agreement.

However, Namibia Diamond Trading Company (NDTC) will continue to sort and value all of Namdeb Holdings’ production.

“De Beers will continue to support the domestic cutting and polishing industry in Namibia, and will increase its commitment by making more diamonds available for manufacturing businesses operating in the country.”

De Beers’ Executive Head of Strategy, Bruce Cleaver, who led the De Beers negotiating team, said they have a long and proud partnership with Namibia, going back more than two decades.

“This longer, 10-year sales agreement demonstrates De Beers’ continued commitment to ensuring that diamonds from Namibia continue to play a key role in the socio-economic development of the country”.

The new 10-year sales agreement is made in principle and it entails sorting, valuing and sales of all of Namdeb Holdings diamonds (production from Namdeb and Debmarine Namibia). The agreement will be the longest sales contract ever agreed between the two partners.

Botswana as a bellwether

There have been calls in Namibia to follow the example of Botswana and compel De Beers to support local manufacturing industry. In September 2011, De Beers and Botswana government signed a landmark 10-year sales agreement that led to De Beers transferring its London-based diamond trading activities to Botswana by the end of 2013.

According to DTC Botswana, Debswana—a 50/50 joint venture between Botswana government and De Beers was expected to continue selling 100% of its annual output to DTCB, which will sort and value the production. DTCB will sell the majority of this production to De Beers and the balance to a new Government appointed sales outlet – Okavango Diamond Company.

The agreement, the longest signed by the two shareholders, sees De Beers’ Sightholders purchasing their rough diamonds from Gaborone and initiates the much-needed critical mass of secondary diamond trading in Botswana.

De Beers Says It Needs To Invest In Technology & Efficiency