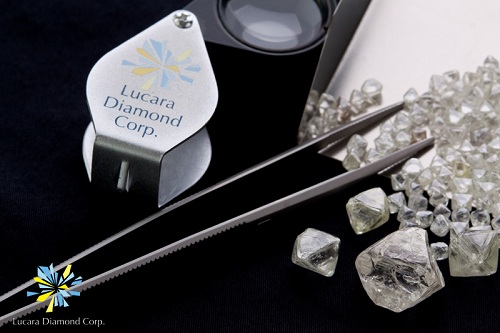 Lucara Diamond Corp. said when releasing its results for the first six months of 2015 that it is in sound financial footing amid concerns in the diamond industry globally. The company reported that it achieved revenues of $38.1 million or $412 per carat in the second quarter of 2015, excluding $1.6 million of proceeds received after the quarter end.

Equally, revenues for the first six months totalled $67.8 million or $340 per carat which were 6.9% higher than the full year dollar per carat achieved in 2014 mainly due to the increase in the number of higher value single stones sold at the regular tender.

The company’s second quarter end cash balance was $74.0 million compared to $82.1 million in the previous year and $100.8 million at the end of 2014. The June cash balance excludes $1.6 million of cash received after the quarter end for its June tender and revenue from the Company’s exceptional stone tender held in July.

Lucara currently has a cash and receivable position of $130.2 million following its July exceptional stone tender.

The company’s President and Chief Executive Officer, William Lamb said they are pleased to have achieved strong operational results and cash flows during the year, which are highlighted by the exceptional stone tender that the market continues to recognise as offering very high quality diamonds.

“The company is currently in a very strong financial position despite what has been a more difficult period for the diamond industry,” he said in the results.

Lucara operates the Karowe mine in the Orapa Kimberlite area. According to the company, mining has performed well with ore mined in line with forecast and waste mining ahead of schedule. The plant optimisation circuits have now been commissioned and fully integrated into the process facility.

The XRT machines have performed extremely well recovering many of the large and high value diamonds sold in the Company’s July exceptional stone tender. The Company is currently working on optimisation of the dense medium separation circuit to maximize the recovery efficiency on the smaller, lower value diamonds processed through the plant.

“The plant optimisation project has been completed on schedule and within budget. The large diamond recovery is performing extremely well as evidenced by the recovery of large stones that contributed to the last exceptional stone tender. We are now working on optimizing the recovery of our smaller, lower value diamonds”.

In 2014, the Lucara was awarded two precious stone prospecting licenses located within a distance of 15 km and 30 km from Karowe respectively. The company’s construction of a bulk sampling plant is largely complete. It said commissioning is on schedule for the third quarter with core drilling and bulk sampling activities to commence on receipt of the approved environmental management plan.