Gem Diamonds, the London listed diamond producer said it may be forced to review its costs guidance following bad weather in Lesotho that affected operations at Letšeng Mine. The company, which also owns Ghaghoo mine in Botswana, stated that excessive snow falls and severe wind had hindered access to the mine recently. 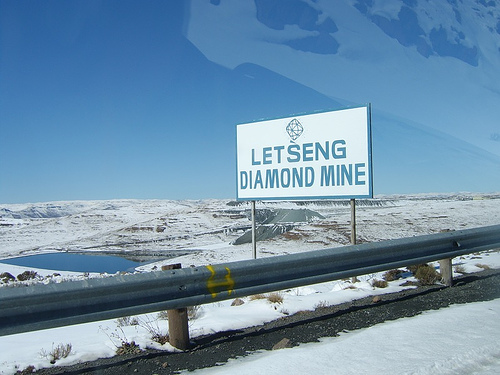 “Full Year guidance for ore tonnes treated and operating costs may need to be re-assessed but due to the strong operational performance in H1, carats recovered are not expected to be affected materially,” the company told shareholders.

“The Board will provide an updated view of the current year’s operational guidance with the announcement of the Company’s Half Year Results. Full Year carats recovered will likely be within original guidance.”

Extreme weather conditions have recently been experienced across the Maluti Mountains in Lesotho, where the Letšeng Mine is located, with excessive snow falls and severe winds limiting access to the mine.

Gem Diamonds said following damage to the overhead power lines, standby generators installed at the mine have been used to mitigate some of the impact, allowing the plants to operate, albeit at reduced rates.

The Lesotho Electricity Company (LEC) is currently on site carrying out repairs to damaged overhead power lines. External power supply is expected to be fully restored in the short term, it added.

Letšeng has provided accommodation and food to approximately 250 local people who were unable to cope during the severe weather. The Deputy Prime Minister and a government delegation have visited the mine and thanked the management for its assistance to villagers during this difficult period.

Gem Diamonds is a leading global diamond producer of high value diamonds. The company owns 70% of the Letšeng mine in Lesotho and 100% of the Ghaghoo mine in Botswana. The Letšeng mine is famous for the production of large, top colour, exceptional white diamonds, making it the highest dollar per carat kimberlite diamond mine in the world.