Botswana Diamonds (BOD) said it has found a diamond on its early stages of analysis of material from its exploration in the Orapa diamond district. The Aim-listed explorer noted the stone was discovered in the early stage of the re-analysis by Alrosa specialists of concentrate from Large Diameter Drilling on kimberlite pipe AK21 on PL 260.  It is a 1mm octahedron-shaped diamond. 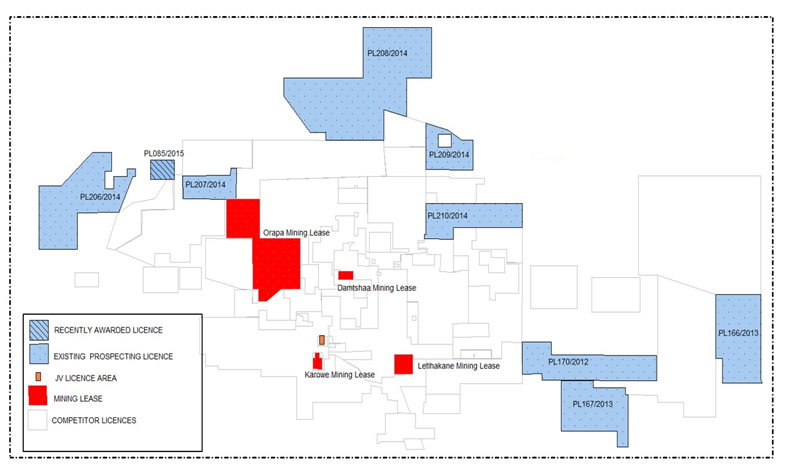 Licences held by the Joint Venture in the Orapa Area

As previously announced, two Large Diameter Drillholes (LDD) were completed on AK21 on Licence PL 260 in April 2016.  Eighty tonnes of samples were sent to a processing facility in South Africa.  Control microdiamonds were included in the material, in line with best practice to detect inefficacies in the processing plant.

The results from the laboratory demonstrated that test work was insufficiently robust as no diamonds were recovered, not even the control diamonds.  Accordingly Botswana Diamonds recovered the concentrate from the processing facility and re-analysed it using Alrosa mineralogists, who travelled from Russia to Botswana.

The first 20kg re-analysed produced a 1mm octahedron diamond – this was a newly discovered diamond and not one of the control stones.  A further 60kg of sample is currently being analysed.

According to BOD, Drilling is ongoing on PL 260.  Two core holes are targeting pipe AK22.  Fresh, virgin kimberlite has been discovered.  The objective of these two holes is to compare the mineralogy with the results obtained from historical drilling.  Core from these holes will be initially analysed in Letlhakane, Botswana, by Alrosa mineralogists and then sent to St. Petersburg, Russia, for detailed evaluation.

BOD Chairman, John Teeling said the Alrosa/BOD joint venture identified licence PL 260 in Orapa as having strong potential. He said the area had already identified anomalies which deserved attention.  “Moreover, historical drilling had found several diamonds, albeit not yet enough to be commercial grade,” he said.

“We now believe that there is commercial potential, so we have undertaken both a core hole and a LDD hole programme.   The discovery of a 1mm diamond in the first 20kg of material is a positive development as we now know there are diamonds in the pipe.  We have more work to do on the material.”

The current core hole drilling is on a known kimberlite, AK 22, which is close to AK 21.  We have intersected the pipe and are pleased with the material being recovered, Teeling said.