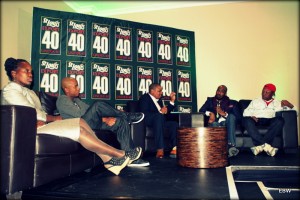 Friday 9th August 2013 saw the exciting second instalment of the St Louis Export Top 40 Under 40 Crystal Chats held at Lansmore Masa Square. St Louis Export’s Top 40 Under 40 an initiative which has brought together different individuals under the age of 40. These are people who have a shown a commitment to positive change in their environments. The initiative has already seen its inaugural Crystal Chats forum inspire thought leadership discussions amongst attendees and the public as a whole. The second Crystal Chats evening proved to be equally well received.

Amongst the guests in attendance were renowned public figure, judge, human rights activist and writer, Unity Dow. Dow earned acclaim for her stance on women’s rights, serving as the plaintiff in a landmark case that allowed the children of women by foreign nationals to be considered Batswana, effectively shaking up the law fraternity in Botswana.

One of Botswana’s few lyrically-gifted MCs, Thato ‘Scar’ Matlhabaphiri, was also amongst the speaking panel. Scar is a twice-nominated artist for two categories in the Channel O Spirit of Africa Music Video Awards, having championed the way for many aspiring rappers by releasing a full length hip hop album.

Monametsi Kalayamotho, also a catalyst began his career as a businessman and entrepreneur over 12 years ago and has made his mark in the IT world in Botswana. Through his leadership and entrepreneurial skills, Monametsi built Moro Group into what it is today.

Said KBL Premium Beer Marketing Manager Ms. Amakura Erbynn, “We are very excited that the Top 40 Under 40 is making such big waves in areas that we think are of high importance in our country. The first Crystal Chat was an enormous success and has piqued the interest of many Batswana. We hope to build on more of that success with subsequent Crystal Chats.”

St Louis Export’s Crystal Chats create a forum for ideas and philosophies to be shared, encouraging guests to learn something new. The platform continues to live true to its objective of encouraging Batswana to recognise and celebrate their own ‘catalysts’ within society.

St Louis Export countdown to reveals final 40 Catalysts is on

Global Master Chef bakes up a storm at Lansmore