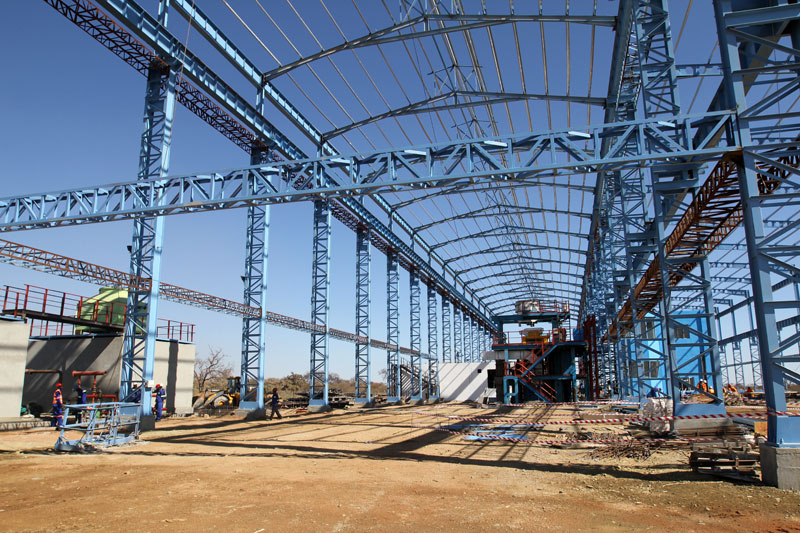 Pula Steel is under construction

Despite earlier setbacks, Pula Steel Manufacturing and Casting plant is taking shape and is due for official opening by Independence celebrations.

The Selebi Phikwe based project was incorporated in 2010 to set up a fully integrated steel manufacturing from scrap metal to 240 tonnes of billet and further processed to rebar on a daily basis.

The construction of the plant, which is overseen by Hindok Exports Ltd from India, is underway. BCL, which owns 50.5% of Pula Steel, is bullish on the project saying it will change the economic landscape of the small mining town.

Managing Director of BCL, Daniel Mahupela said the official opening of phase 1 of the project will be on September, 28, 2015. “The construction programme is progressing as per schedule and plant commissioning is planned for August of 2015,” revealed the MD.

According to Mahupela, as a show of commitment to the project, BCL board approved an investment of up to P53 million to support construction of the plant. “The critical outlay is a result of fast-tracking and bringing forward some of the key processes of the project to ensure that it is delivered,” he said.

Hindok was selected since they were able to supply Pula Steel with a modern and affordable plant, according to its management. The Indian company is also said to have more than 30 years experience in manufacturing and installation of such plants all over the world including Nigeria, Kenya, India and Dubai.

The plant would require 15MW of power and so far, Botswana Power Corporation (BPC) has given Pula Steel the go ahead to build a 66KV line that will feed into the plant’s sub-station, which is currently under construction.

The market for Pula Steel includes Middle East and some parts of Asia including countries like India. Ranvir Verma, who is the Managing Director of the company, said cutting and processing of scrap has already started at the BCL Scrap site. The project was initially budgeted for P89 million, but upgrades to specifications meant that the figure went up.

Former Vice President Ponatshego Kedikilwe said at the groundbreaking event last year that he hoped the steel plant will be a springboard for BCL in developing the iron production circuit to curb over reliance on import of steel and steel related products.

“In terms of Polaris II configuration, the iron production circuit, one of the themes BCL strategy, aims to beneficiate iron ore which will create employment opportunities, reduce steel imports and generate foreign exchange for the Botswana economy; in short grow the economy,” he said at the time.

Kedikilwe said Botswana has been a net importer of steel at high premium with demand for steel in the country amounting to P2.6 billion in 2013. “The demand was met by importing from a number of countries with South Africa being the largest source of imported steel at 50 percent, followed by China with 40 percent,” the VP revealed.