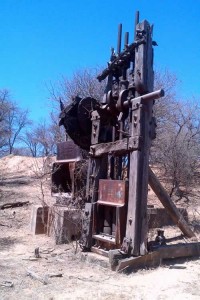 Galane Gold Ltd. is conducting a long term exploration programme over a large number of prospects contained within its mining leases and exploration tenements which cover the bulk of the Tati greenstone belt in Botswana. Therefore, the company has provided update concerning on-going exploration work at Tekwane Prospect to define gold mineralisation found in a flat-lying quartz rubble bed within the soil profile, close to surface. The company’s news release dated December 3, 2012 disclosed details regarding the first phase of this work.

Through a regional program completed by a predecessor to the company in 2002 a gold-in-soil geochemical anomaly, called Tekwane, measuring 2.6 km X 1.0 km in size was shown to exist but no further exploration work was completed at that time. Tekwane is located approximately 11 km by main road from the company’s processing plant at the Mupane Mine, just to the north of the Archaean Tati greenstone belt in Botswana. It is covered by Prospecting Licence 101/2011 held by the company’s wholly-owned subsidiary The Northern Lights Exploration Company (Pty) Limited.

Overall, 120 pits (of the 420) have yielded an average sampled width of 0.24m with grades shown in the tabulated summary of all pit results which is attached to this release as Schedule “A”.

Philip Condon, Galane Gold’s CEO stated that the completion of this stage of the exploration program on Tekwane is very exciting for Galane in that the company is building on the potential in both the quartz rubble horizon and the source of the auriferous quartz. “The quartz rubble is free digging and less than 2 metres below the surface and represents a possible low cost mining and simple processing deposit in itself. In addition, the methodical exploration program we are executing is designed to maximise the possibility of finding the bedrock source of the auriferous quartz,” he said.

The program of work commenced in March of 2012 and the first phase of 72 pits was reported in December of 2012. A further 348 pits (for a total to date of 420 pits) have been excavated and form the basis of this release. This program is now completed and has “found the limits” of the auriferous quartz rubble horizon at Tekwane.

The method of exploration is to excavate pits by a mechanical backhoe. This was done on a systematic grid with pits every 50m along lines that are 100m apart. The average depth is 1.5m, exposing the full soil profile, which contains an auriferous quartz rubble horizon, and into the underlying bedrock. Pits are logged and the quartz rubble and bedrock exposures are sampled in detail. To date 420 pits have been dug and sampled, while another 218 infill pits are being excavated as the final stage. These allow for a selective infill such that the grid will be 50m X 50m in the important areas. Finally, continuous trenches will be excavated selectively between the 50m pits to allow for evaluation of continuity. This density of pits and the continuous trenches are expected to form the basis of a resource estimate that is compliant with National Instrument 43-101 – Standards of Disclosure for Mineral Projects (“NI 43-101”).

The detailed logging and sampling of the bedrock exposed in the pit bottoms remains inconclusive at this stage, although a pattern is emerging which will be better defined by the 50m infill pits currently being dug.