A 2.6 billion-year-old rock has made a journey of almost 14,000 kilometres from Australia’s Pilbara region to London and will go on display at a new exhibition at the Natural History Museum (NHM), opened by HRH The Duchess of Cambridge. 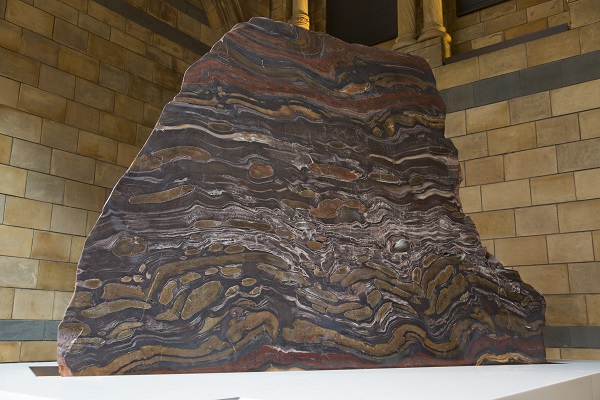 The colourfully layered 2.5 tonne rock, a piece of banded iron formation (BIF), was chosen by the NHM as part of a wider exhibition to celebrate the wonder and beauty of the natural world, from the origins of the universe, to the story of evolution and diversity in the world today.

BIFs were formed more than three billion years ago when bacteria in our planet’s young oceans began to produce oxygen through photosynthesis. This oxygen combined with dissolved iron in the sea to form insoluble iron oxide, which separated out of the water and sank to the seafloor. As it settled, bands of red and grey iron-oxide developed between layers of silica-rich sediment. Without this process, there may never have been an oxygenated ocean to support the eventual evolution of more complex life on Earth.

Sourced from Rio Tinto’s Mount Tom Price mine and selected with the assistance of Traditional Owners, the Eastern Guruma people, the rock was diamond-cut to shape before being shipped to London. It will now form part of the Natural History Museum’s newly refurbished Hintze Hall display, opened by the museum’s patron, HRH The Duchess of Cambridge, and Sir David Attenborough at a gala launch.

Rio Tinto Group executive Growth & Innovation Stephen McIntosh said “We are very proud to have been involved with the Eastern Guruma people in donating a piece of such significance to the Natural History Museum. The BIF provides an important geological marker for when the first oxygen-generating life formed in the oceans, and helps us to understand how the world we know today evolved.”

“Iron ore has been at the centre of the Earth’s development for billions of years and human development for thousands of years. From the iron age to today’s steel age it has been essential to human progress,” he added.