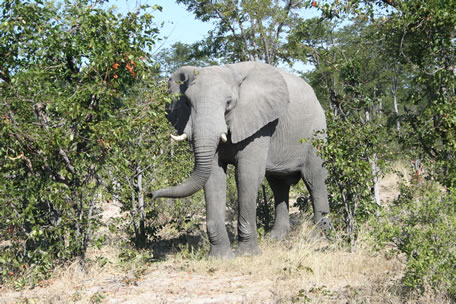 Botswana has partnered with the International Union for Conservation of Nature (IUCN) to convene the African Elephant Summit, as called for in a Resolution adopted by the IUCN World Conservation Congress in 2012. The summit will be held from 2- 4 December.

The summit comes at a time when elephant poaching and the illegal ivory trade are a major concern across Africa and beyond, with serious security (particularly in Central Africa); economic; political and ecological ramifications as these crimes increase in frequency and severity and expand into previously secure elephant populations.

Criminal gangs and militias are using sophisticated military ware to kill elephants and take advantage of high-level corruption to move ivory across borders and off the continent. In some cases, the proceeds from illegal killing of elephants and the illegal ivory trade are used by criminal networks to undermine democratic rule in African states and to fund armed militias and rebel groups engaged in internal and cross border conflicts.

Elephants are an iconic species, whose well-documented ecological role in natural landscapes contributes to healthy ecosystems, supporting the water, energy and agricultural sectors in many African countries. As major tourist attractions, illegal killing of elephants reduces the ability of many African countries to harness ever-growing tourism business opportunities.

Governments at all points along the illegal ivory value chain, including African elephant range States, ivory transit States, and the States that are the major consumers of ivory, have expressed willingness to cooperate to address the current situation for African elephants.

“While the Government of Botswana and IUCN are aware that other initiatives are aiming to address various aspects of the illegal trade in ivory, including the African Elephant Action Plan, Decisions and Resolutions of the Convention on International Trade in Endangered Species of Fauna and Flora (CITES) and national strategies, amongst others, we are convinced that, given the magnitude of the problem, and the fact that illegal trade is increasingly entrenched in organized crime networks, the African elephant crisis cannot be adequately addressed by the actions of environment ministries and wildlife authorities alone,” said a statement.

To convene a high-level meeting in 2013 to secure commitment at the highest political level to take urgent measures along the illegal ivory value chain, by African elephant range States, ivory transit States, and the States that are the major consumers of ivory, to effectively protect elephants and significantly reduce in the illegal trade in ivory.

The summit seeks to raise awareness at the highest political level about the dimensions of the poaching crisis and the dynamics of the illegal ivory trade, commit to urgent actions to be taken to secure viable elephant populations across the continent and to halt the illegal trade and seek political, financial, and technical support in implementing these urgent actions.