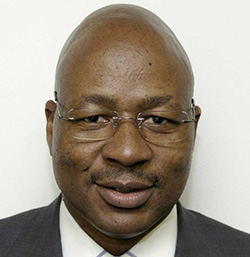 Makhubela has had an illustrious and distinguished career in the public service having recently concluded his tenure as the Director-General of the Department of Tourism and prior to that, holding, amongst others, the position of Chief of State Protocol at the Department of International Relations and Co-operation.

His tenure at the Department of Tourism makes Makhubela an ideal candidate as CEO of Brand South Africa since place and/or destination marketing is one of the elements of nation branding.

Makhubela was at the helm of the Department of Tourism during South Africa’s hosting of the 2010 FIFA World Cup, the first in Africa.  South Africa continues to leverage the reputational dividend of hosting one of the safest and best organised tournaments in its history.

During Makhubela’s term of office at the Department of Tourism, he displayed a competence in bringing together a range of stakeholders in positioning South Africa as a preferred tourism destination.

Makhubela also has a long career in the diplomatic service, serving most recently as the Chief of State Protocol at the Department of International Relations and Co-operation.  In this portfolio, Makhubela was responsible for co-ordinating all incoming and outgoing international visits by the President, Deputy President, Minister of International Relations and Co-operation, all visiting Head of State and Government and a host of other dignitaries.

Makhubela has also served South Africa in the capacity of Ambassador to Portugal from 1996-2001 and as High Commissioner to Kenya from 2001-2005.

Holding a Master’s degree in Diplomacy from the University of Pretoria, Makhubela is also very familiar with the African developmental agenda and will bring this wealth of experience to the portfolio as CEO of Brand South Africa, particularly as South Africa looks at how it is perceived within the continent in particular and the global community of nations, in general. His experience in developing and implementing strategies aimed at positioning South Africa will serve him well as CEO of Brand South Africa.

Makhubela is currently completing his PhD at the School of Political Science at the University of Pretoria.

Welcoming him to Brand South Africa, Chairman Chichi Maponya said, “Brand South Africa is pleased to welcome Mr.Makhubela on board as CEO.  The trustees, management and staff of Brand South Africa are certain that his experience in public service which includes representing South Africa as a Head of Mission, as well as his understanding of the domestic and international policy space, will be invaluable in positioning South Africa as an investment destination of choice.  We wish him well in his tenure as CEO and we are confident that he will inspire new ways of managing the country’s reputation in challenging times.”

Makhubela has equally expressed his appreciation at being appointed to head South Africa’s reputation management agency saying, “It is indeed an honour to serve South Africa in the capacity of CEO of Brand South Africa.  I look forward to the opportunity to work with my capable and passionate team to position South Africa as an investment destination of choice.” Makhubela assumed office on 1 August 2015. (APO)