Miriam Tichapondwa-Vasco joined Wilderness Safaris Botswana in June 2004, starting her career as a Trainee Manager at Tubu Tree Camp. Her fiery determination and passion for Botswana’s wilderness areas has seen her gain immense experience within Wilderness Safaris, working her way through management levels before being promoted to Business Unit Manager for the newly-revamped Maun Travel Shop in August 2017. 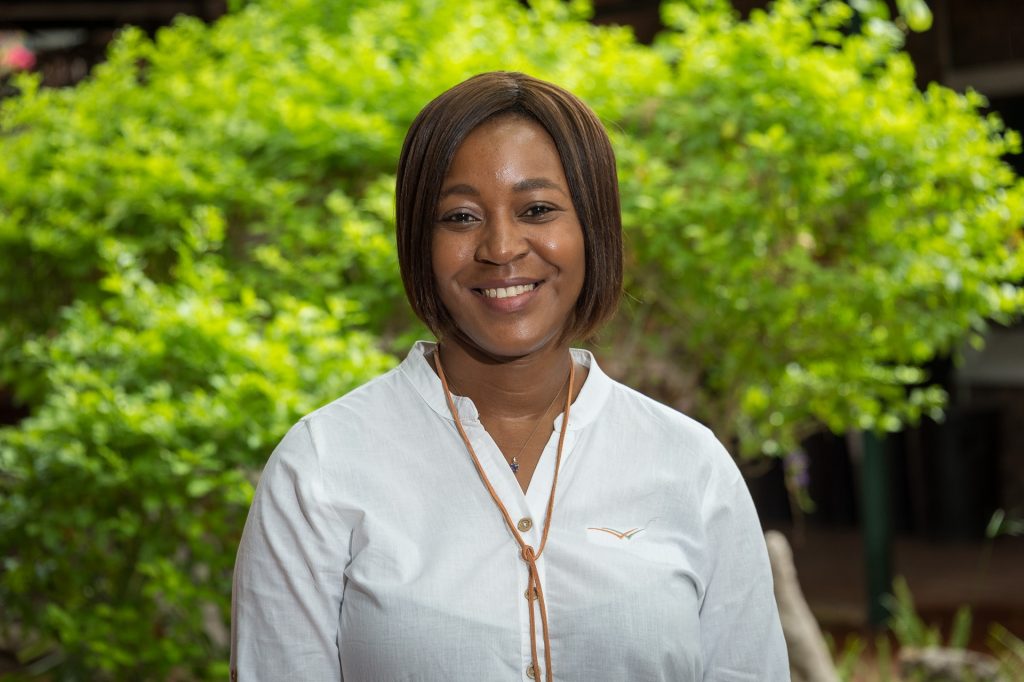 As Business Unit Manager, Miriam’s primary role is to introduce reservations systems, structures and staff to mirror and match the high levels of professionalism as displayed in Wilderness Safaris’ reservations teams across the Group. Miriam also continues to oversee Guest Operations to ensure service excellence for all Wilderness guests.

After joining Wilderness in 2004, Miriam completed her management training within three months and was then appointed General Manager of Baobab Camp in the Chobe District. She oversaw the build and launch of a second Baobab Camp in April 2005, including hiring and training the staff, before being promoted to Guest Experience Manager for Kings Pool Camp in the Linyanti. Within a year, she was appointed General Manager for DumaTau Camp, together with her then fiancé, Attorney Vasco. The duo then took the DumaTau experience to another level, focusing on delivering an outstanding guest experience. Their adventure continued as they moved on to being the General Management couple at Vumbura Plains – with Miriam being promoted to Assistant Operations Manager for both the Vumbura and Mombo concessions eight months later.

After three years assisting with optimisation across the spectrum of Wilderness Safaris camp operations, Miriam opted to learn a different side of the business and joined the Travel Shop and Guest Operations Team in the company’s Maun office. She holds an Honours Degree in Tourism and Hospitality Management, a B.Com Accounting Degree and is also a Graduate and Associate Member of the Chartered Institute of Secretaries and Administrators of South Africa.

Miriam thrives on touching people’s lives, by providing a service that brings smiles to their faces, and is very proud to be a part of creating journeys that result in life-changing experiences. “My goal is to be a key part of the development of tourism in Botswana as a whole. By being an ambassador for the country and Wilderness Safaris to the local and international community, as well as encouraging and hopefully inspiring young Batswana to take pride and ownership of the unique gem that is Botswana, I hope to play a continuing role in conserving the environment for future generations to enjoy”, Miriam concluded.