Cautious Polished Lags Behind Strong Rough Market Diamond trading slowed in April, marking the start of the traditionally quieter second quarter. Sentiment was positive despite lower trading volumes, due to improving retail expectations in China, where the jewellery market is showing signs of recovery.

The trade’s focus shifted to the US ahead of the Las Vegas shows as the hype surrounding the March Hong Kong fair subsided. Dealers held off from closing deals, hoping Las Vegas would boost activity. 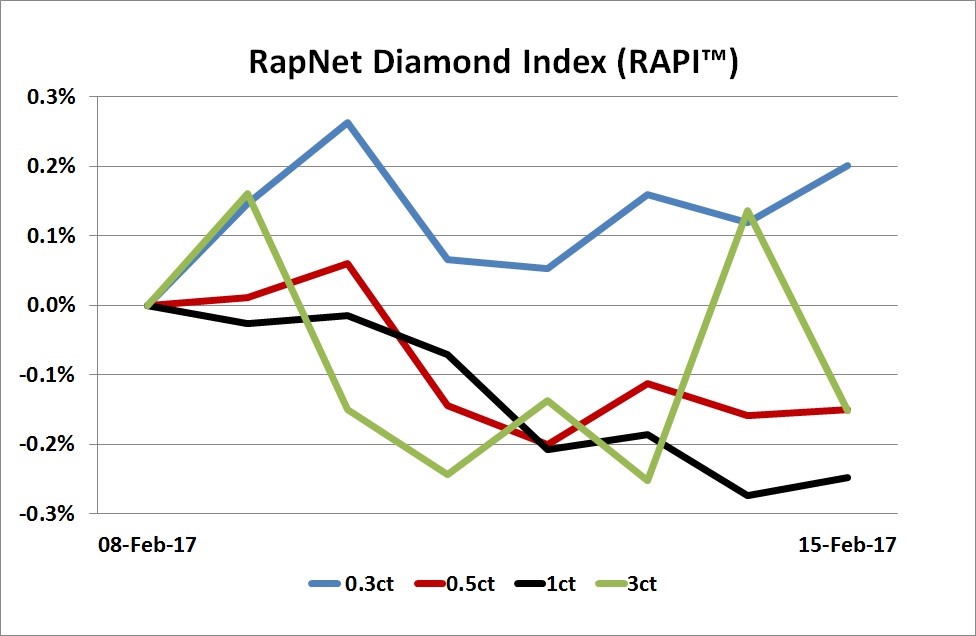 The RapNet Diamond Index (RAPI™) for 1-carat polished diamonds slid 0.3% in April and was down 1.4% since the beginning of the year.

Amid sluggish polished markets, rough trading remained strong. Manufacturing returned to near-full capacity as the large Indian factories ramped up operations following the November Diwali break. Polished inventory is rising, with the number of stones listed on RapNet having increased 3.5% in April and 7.5% since January 1.

Strong rough markets enabled the major mining companies – Alrosa and De Beers – to reduce inventory as their combined first-quarter sales volume exceeded production by 11.9 million carats. Global diamond production is expected to rise an estimated 12% in 2017, as miners have committed to produce according to rough demand.

The Rapaport Monthly Report – May 2017 notes the buoyant rough market is not supported by current levels of polished demand. Rough prices firmed 2% to 3% since the beginning of the year, while polished prices softened. India’s rough imports by volume soared in the first quarter, while polished trading volumes in India and Belgium declined.

A continuation of these trends will put stress on the manufacturing sector, as liquidity and profitability may be eroded. After a period of improved profit margins and responsible trading in 2016, manufacturers must tread with caution, as the polished market tends to slow in the second quarter.

Anglo American Bounces Back To Profitability

Lucara Diamond Corp. has entered into a definitive supply agreement for the remainder of 2020 with HB Group out of Antwerp,…