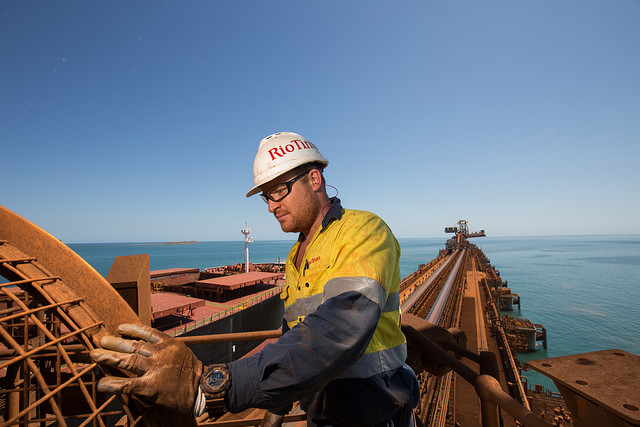 The port at Cape Lambert, The Pilbara

Rio Tinto said it has demonstrated how the completion of its world-class iron ore expansion project in Western Australia will deliver significant shareholder value as the sector transitions through the ongoing volatility in global commodity markets.

At an investor seminar in Sydney, the company outlined the next phase in its long-term strategy to capitalise on the growing global demand for high-quality iron ore through a relentless focus on productivity and efficiency, technology, and people development to drive costs lower at its Pilbara operations.

Rio Tinto also revealed new detail on the data underpinning its projections for 2.5 per cent average annual growth for steel demand across China and the rest of the world over the next 15 years.

This rigorous analysis confirms that Chinese crude steel production is expected to reach around one billion tonnes by 2030.

Emerging markets will also play an increasingly significant role in the iron ore market, with non-Chinese steel demand expected to increase by 65 per cent by 2030.

Rio Tinto Iron Ore chief executive Andrew Harding said as they we move into their 50th year of exports from Australia, Rio Tinto is embarking on a new phase in our iron ore business.

“We have spent the past decade building the best iron ore business in the world – a project that has come in on time and below initial cost estimates. We intend to optimise these new assets to deliver maximum value for shareholders and stakeholders as markets transition.

“Our long-term strategy is supported by comprehensive market analysis, leadership in people, world-class technology and an unrelenting pursuit of productivity improvements. Rio Tinto has some of the best tier one mining assets in the world and our workplace culture of chasing new efficiencies will ensure we remain the best iron ore producer in the industry.

“We are also focused on realising further costs savings through some 400 efficiency initiatives across the Pilbara.”

“Rio Tinto’s first-mover status in autonomous equipment has resulted in significant productivity gains while our use of big data analytics has allowed us to safely extend maintenance cycles.

“These productivity gains, combined with our asset management programme, have us on a pathway to safely reduce maintenance costs by about $200 million a year over the next three years.

“The Technology and Innovation team is also ensuring that Rio Tinto not only undertakes the right projects but when we do them, we do them right.”