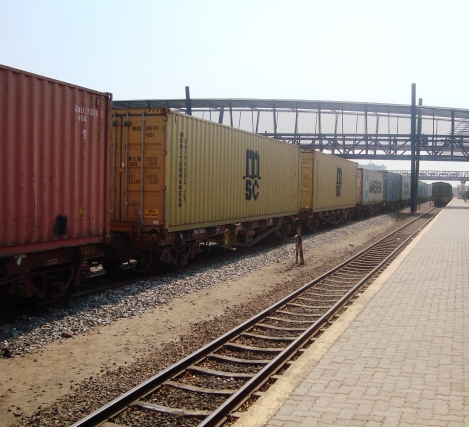 Statistics Botswana has revealed that imports, exports, local traffic and transit traffic of the rail transport sub-sector have fluctuated over the years with transit traffic recording the lowest revenue each time.

According to Transport and Infrastructure Statistics for Quarter 3 of 2014, a total of 497,898 goods traffic was recorded for Q3 2014. The report says imported rail goods accounted for the largest proportion of total rail goods traffic. Rail goods made up 40.7 percent and exports made up 36.1 percent of total traffic.

On a monthly basis, during the period July, August and September contributed 33.6, 33.3 and 33.1 percent respectively of the total goods traffic during quarter, Q3 2014.

On the other hand, the months of July, August and September 43.7, 40.2 and 38.2 percent of the goods were Imports respectively. September had the highest number of goods under Botswana Origin contributing 52.7 percent of Botswana Total.

Total Traffic is derived from adding Botswana Total to Transit Traffic (Transit traffic are goods that pass through Botswana to other countries).

Statistics Botswana revealed that a total of P82, 329,000 revenue was generated during Q3 2014, registering a 0.03 percent increase when compared to Q2 2014 saying when compared to the same quarter of the previous year, Q3 2014 recorded a decrease of 0.7 percent.

“The highest contributor to revenue was Exports contributing 42.9 percent of the revenue. Of this revenue, 86.6 percent was from Exports to the South. Transit Traffic contributed 5.7 percent of the total revenue generated. This was a 28.5 percent decline when compared to the previous quarter,” the statistics body revealed.