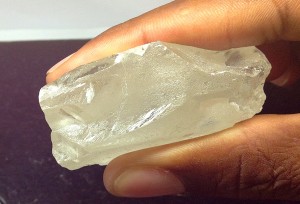 Lucara Diamond Corp. has announced the recovery of a 239.2 carat diamond from its Karowe Mine in Botswana. In addition to the recovery of this exceptional gem, two more large stones weighing 124.0 carats and 71.1 carats have also been recovered.

The diamonds were recovered from the central kimberlite domain which has only recently become ore feed to the plant as the pit expands towards the south.

The diamonds will be sent to Antwerp to be studied prior to being sold later in the year.

William Lamb, President and CEO said the recovery of these large stones is hugely significant to both Lucara and Botswana.

“To the best of my knowledge, the 239 carat stone is one of the largest diamonds ever to have been recovered from the highly prolific Orapa kimberlite field in over 40 years of production. The recovery of a diamond of this size, the confirmed population of blue diamonds, and the strong operational performance in our first few quarters of operation demonstrate the quality of the assets as well as the competence of the operations team.”

Lucara is a well positioned new diamond producer. The Company has an experienced board and management team with extensive diamond development and operations expertise.

Lucara Diamond new Chief Operating Officer to be based in Gaborone

Kalahari Fresh, a new local online multi grocery store, has unveiled its e-commerce website. The site brings the convenience of…