London-listed Gem Diamonds Limited said its care and maintenance costs at their mothballed Botswana mine have spiked as an earlier earthquake that hit parts of the Central Kalahari Game Reserve caused flooding. According to the Group’s operational and sales performance for the Period from 1 January 2017 to 30 June 2017, Ghaghoo mine’s care and maintenance status was successfully achieved ahead of plan on 31 March 2017. 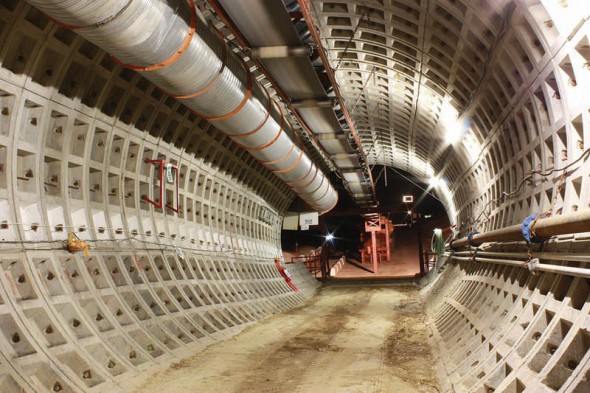 Ghaghoo is currently under care and maintenance

“During the Period, an earthquake with an epicentre 25km from the mine occurred. There was superficial damage to the surface infrastructure, however the earthquake damaged the seal of the underground water fissure, leading to an influx of water,” Gem said in the update.

“This resulted in an increase in the water pumping costs associated with care and maintenance of approximately US$ 0.6 million. The fissure will be required to be resealed and plans are underway to complete this process during Q3 2017,” it added.

The Botswana earthquake of April 3, 2017, occurred in a region of southern Africa that has historically had a low level of earthquake activity. Moment-tensor calculations imply that the earthquake occurred as the result of slip on a northwest-trending fault centered in the lower-crust.

According to the U.S Geological Survey, this focal-mechanism is similar to those of earthquakes in the East African rift system, a diffuse zone of crustal extension that passes through eastern Africa from Djibouti and Eritrea on the north to Malawi and Mozambique on the south and that constitutes the boundary between the Africa plate on the west and the Somalia plate on the east.

The mechanism therefore suggests that the April 3, 2017, earthquake occurred as the result of broad-scale regional tectonic stresses that are similar to those responsible for producing the East-African rift system.

Meanwhile, there were no sales of Ghaghoo goods during the Period. The remaining carats on hand (c. 13 000 carats) are anticipated to be sold during Q3 2017. The mine was mothballed as Gem argued: “…….the material fall in the prices of its diamonds from US$ 210 per carat in early 2015 to US$ 142 per carat at its most recent sale in December 2016, emphasises the weak state of the diamond market for this category of diamonds”.

“With the Company’s focus on profitable production, the decision has been made to place the asset on care and maintenance, and to continue to monitor market conditions for a time when commencing full production would make economic sense,” the company said earlier this year. It was anticipated that, post once off settlement costs, this will result in an annualised care and maintenance cost of US$ 3 million.

According to the trading update, the company’s Letšeng mine recovered 50 478 carats at a grade of 1.59 cpht against an expected reserve grade of 1.63 cpht mainly due to the underperformance of the Main pipe contact material and internal changes in the geology of this pipe. Four tenders have been held in the Period. 49 930 carats were sold for US$ 88.8 million, achieving an average price of US$ 1 779* per carat (full year 2016 – US$ 1 695* per carat). The current average price achieved is up 20% from the US$ 1 480* per carat achieved in the previous 6-month period, H2 2016.

“The improvement in the greater than 100 carat diamond recoveries at Letšeng is encouraging with the US$ per carat achieved trending positively at US$1 779, up 20% from US$1 480 in H2 2016. The market for Letšeng’s high-quality diamonds has remained firm over the Period with the last tender of the Period achieving over US$2 200 per carat,” Gem Diamonds’ CEO, Clifford Elphick said.

“This positive trend has continued with the most recent July tender achieving an average price of US$ 2 3852 per carat. A Group-wide, externally supported cost efficiency and bench-marking review has commenced and has already identified opportunities that are being actively pursued. Further progress on this review will be reported on during Q4.”