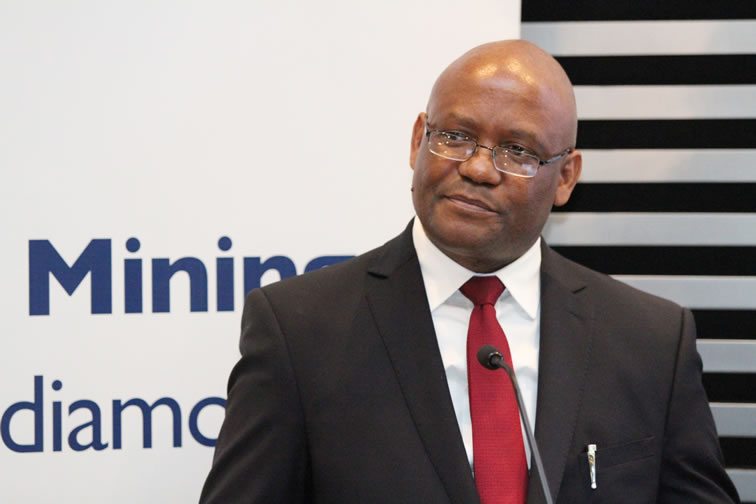 Despite suffering the worst accident in the history of the company in 2012, Debswana says last year was one of the best years as there were no fatalities and serious injuries recorded. The company said its pursuit of ZERO HARM continues with its safety performance comparable to the best in the world. Addressing his first media face-off since being appointed the company’s Managing Director, Balisi Bonyongo revealed that all their operations are OHSAS 18001 certified, which is a top global benchmark.

According to Bonyongo, international mines are certified with this certification and shows that their operations in Orapa, Letlhakane, Damtshaa, Jwaneng and Morupule Coal mine are there with the world’s best. “Our Total Recordable Injury Frequency Rate (TRIFR) of 0.46 is the lowest ever in Debswana and is comparable with the best in the world,” he said. The TRIFR has been declining since 2010 when it stood at 1.14, then 0.96 in 2011, 0.60 in 2012 and now new low of 0.46 in 2013.

Bonyongo added that the company reduced the Lost Time Injuries (injuries that result in atleast one day’s absence from work) by 48% between 2013 and 2014. “The total number of Lost Time Injuries across our mines has continued to come down as the culture of Near Hit reporting and closure of Near Hits continues to improve,” he added. For example, there were 3 945 near hit reports in Jwaneng mine in 2011 compared to 23 446 in 2014, which translates to a 50% decline in lost time injuries at the mine. Equally, the Orapa, Letlhakane and Damtshaa mines (OLDM) Annual Near Hit Reports stood at 1 293 in 2011, but the figure rose to 28 367 last year, with lost time injuries down by 40%.

The same thing applies to the coal mining unit, Morupule Coal mine, which saw its lost time injuries going down by 27% between 2013 and 2014. Debswana’s safety record was tested in 2012 when the company, owned 50/50 by Botswana government and De Beers, recorded two lost time injuries at Jwaneng mine. There was another failure in 2013, at the Jwaneng mine’s Cut 6, which the company managed to contain as it was predicted on October 23, 2013 and time of pit evacuation was around 1:30 a.m in the morning whilst the failure occurred five hours later at 0520.

Debswana operates four open pit mines and one underground Coal Mine, which is the only producing coal mine in the country. These mines are: Jwaneng where it has 2,070 employees and 2982 contractors; Orapa mine with 2,306 employees and 1,915 contractors. It also has smaller operations namely Letlhakane with 386 employees and Damtshaa 261 employees. The Palapye based Morupule Coal Mine has 400 employees.

Debswana prepares to close Letlhakane pit. The mine life of this open pit mine comes to end in 2016. According to Debswana, the mine which was first discovered during the sampling and evaluation process at Orapa, and became the company’s second mine when it opened in 1975 would cease operation by next year as the company begins to treat tailings near the pit.

Bonyongo revealed that they have the company board mandate to ‘start executing this project’ so that there is continuity in Letlhakane. Funding for the Letlhakane Modular Tailings Plant was approved in Nov 2014 while construction began in Q1 2015.

He said there will be recoveries of diamonds from tailings through the use of new and improved recovery technologies. The project has the capacity of up to 800,000 carats per annum and could extend the life of the mine by 20 years. Bonyongo said as there is ramp up of waste mining at Damtshaa mine, the company decided to take the Letlhakane employees to Damtshaa as “Letlhakane prepares to close pit and start treating tailings”.