The Kavango Zambezi Transfrontier Conservation area (KAZA TFCA) – is hosting a State of KAZA Symposium from 31 October to 2 November in Victoria Falls Safari lodge, Zimbabwe. KAZA TFCA is Africa’s largest conservation landscape and the world’s largest transfrontier conservation initiative joining areas of five countries: Angola, Botswana, Namibia, Zambia and Zimbabwe, which have entered into a partnership to conserve biodiversity at scale using nature-based tourism as the engine for rural economic growth and development. 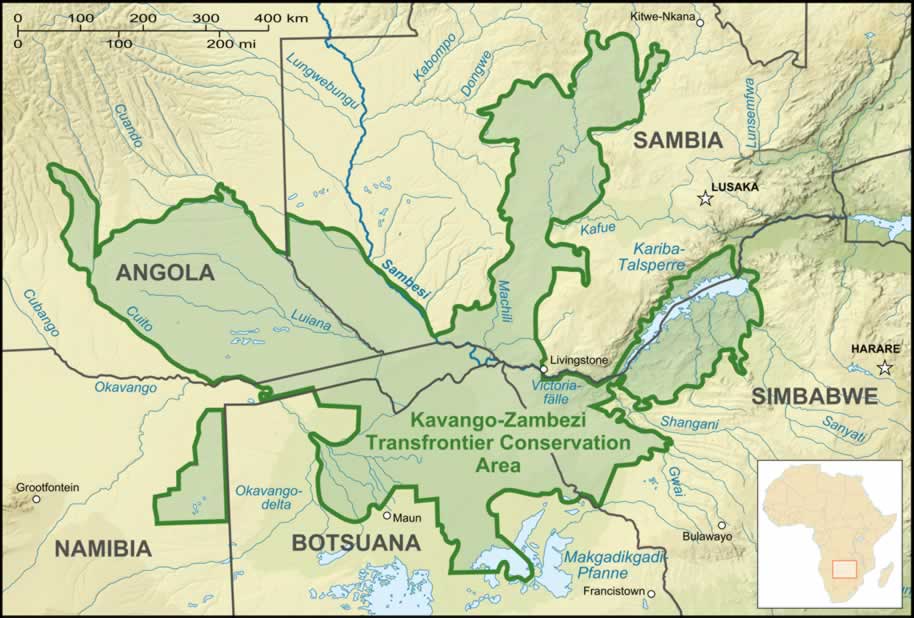 The five partner countries signed a Memorandum of Understanding on 7 December 2006 at Victoria Falls, Zimbabwe, and five years later the KAZA Treaty was signed in Luanda, Angola on 18 August 2011. The TFCA is supported by a Secretariat based in Botswana, and conservation NGOs.

The State of KAZA Symposium, held at the Victoria Falls Safari Lodge, is therefore a celebration of success in conservation collaboration across African borders, as well as an opportunity to assess progress and challenges. The State of KAZA Symposium is a stepping stone to the production of the state of KAZA report, which will provide for the KAZA partner countries to look back on their commitment 10 years ago when they signed the KAZA MOU.

The symposium will evaluate the progress and achievements to date and share lessons and provide strategies of addressing the gaps, challenges and implementation of the success stories. The symposium will be drawing together governments, traditional authorities, trans boundary natural resources forums, conservation and development NGOs, conservation biologists and other scientists to share experiences, learn from each other and to map a way forward for integrated conservation and sustainable development in the KAZA TFCA as an economic option for the region integration and development.

The objectives of KAZA, are to manage the shared natural resources of the area fed by two of Africa’s major rivers (Okavango and Zambezi), and to support healthy and viable populations of wildlife species. This will be achieved by providing opportunities, facilities and infrastructure to transform the KAZA TFCA into a premier tourist destination, benefitting rural populations.

The Symposium agenda is based upon the KAZA Master Integrated Development Plan, a five-year strategy produced in 2014 to steer development of the TFCA at a regional level. It will begin with a review of the three main components of the plan: integrated natural resource management & land use planning; tourism development; and community development, alternative livelihoods and governance.

Unlike a parks-based approach, where people are excluded from wildlife areas, the KAZA TFCA aims to integrate the previously competing land-uses of agriculture and a wildlife based economy. By encouraging the growth of community and nature-based tourism, KAZA will provide alternative income generating possibilities to rural communities, which will lead to a greater tolerance of wildlife by farmers.

By collaborating on land-use policy the five countries will improve agricultural practices and provide for freer movement of wildlife between farmland and across national boundaries by the establishment and maintenance of wildlife corridors.

The three-day Symposium will provide an opportunity for conservation and development specialists to review progress towards the harmonisation of policies, the establishment of tourism infrastructure, and capacity building of communities to play a greater role in the management of their own natural resources.

The Symposium will break into thematic groups to examine the implementation of the five-year strategy in detail, to seek solutions to challenges, and to advice on future options. Experts in conservation, tourism, financial services, veterinary science, land –use planning and community development will be able to exchange views.

Ministerial delegations and representatives of traditional authorities will take part in the Symposium, reinforcing the political support from the five KAZA states and community representatives to achieve the twin goals of conservation at scale and rural development.

One of the objectives of KAZA is to “promote and facilitate the harmonization of relevant legislation, policies and approaches in the area of transboundary animal disease prevention, surveillance and control within the KAZA TFCA.” Immediately following the Symposium a follow-on workshop will be held to consider the implementation of commodity-based trade of beef in KAZA, under the auspices of the KAZA Secretariat, in collaboration with the AHEAD Programme and FAO, and with support from The Rockefeller Foundation and the Planetary Health Alliance. Wildlife and livestock production are in conflict in the KAZA area partly due to the prevalence of animal diseases – especially foot and mouth disease – that can be transmitted across species.

The workshop will bring together stakeholders from the livestock and wildlife sectors to discuss important opportunities associated with key 2015 changes to international disease management standards pertaining to beef trade – ones that facilitate an approach to beef production that is more compatible with wildlife conservation, and which would thus be a ‘win-win’ for sustainable and diversified land uses and livelihoods.

The workshop will be a practical example of KAZA in action: an African trans boundary conservation area harmonising agricultural policies and promoting land use that embraces wildlife and livestock to the benefit of rural communities and conservation.

Momentum for solar-diesel hybrid microgrids in the Zambian mining industry