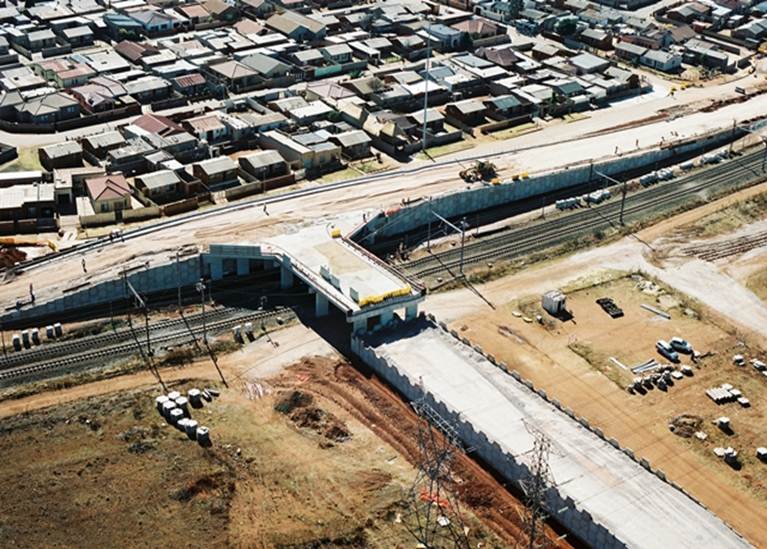 The City of Johannesburg has commenced the roll-out of its R365-million work to upgrade the Soweto Freeway, M1 and M2 highways to improve mobility on the municipal roads.

This is part of the City’s R110-billion infrastructure investment over 10 years that is also directed at changing the spatial design of the metropolitan in a bid to ease congestion and flooding on the city’s roads.

In addition, R152-million has been earmarked for the construction and rehabilitation of bridges across the city. All these major projects are in line with the city’s Growth and Development Strategy 2040 to reverse the apartheid legacy of spatial segregation and discrimination.

City of Johannesburg Executive Mayor, Parks Tau said a total of R1.4-billion has been budgeted to improve roads, storm water infrastructure and bridges in the 2015/2016 financial year.

In making the announcement of the projects roll-out in Newtown, Mayor Tau said all these major infrastructure projects will be undertaken by the Johannesburg Roads Agency (JRA), which is the City-owned agency responsible for the maintenance, repair and development of Johannesburg’s road network and storm water infrastructure, including bridges and culverts, traffic lights and signage.

Mayor Tau indicated that the major infrastructure projects were in line with a holistic strategy to overhaul the City’s roads infrastructure and ensure a better life for all residents through the transformation of the City’s spatial form.

“The upgrade of our roads infrastructure is part of our efforts to create a better future for our residents where we can link jobs to people and people to jobs – in line with the objectives of our spatial transformation programme, the Corridors of Freedom,” he said.

Acting Managing Director of the JRA, Mpho Kau, added that work on some of these bridges will result in possible road closures. “However, the end result will ensure that residents are ultimately able to travel to their destinations faster and more safely,” he said.

Kau further pointed out that enhancing road infrastructure and improving movement within the city was a necessity in an emerging market such as South Africa – adding that at a micro level, it would alleviate challenges such as storm water drainage and to some extent, congestion.

He added that “roads and bridges form a critical part of the transport infrastructure of a growing city”.

“Thus their maintenance and rehabilitation is important. It ensures that the movement of people, as well as goods and services, continues effectively and efficiently – having a positive impact on local economic growth,” Kau said.

In recent years, under the leadership of Mayor Tau, the city has launched a number of initiatives to ensure its growth strategy is based on the principles of transit-oriented development.

During recent inspections of 814 bridges in the city, which boast an asset value of R15-billion, the JRA found that some required rehabilitation such as upgrades, construction and expansion.

These include the Oxford, Federation and Double-Decker bridges on the M1 freeway, where work will start in September. Work will also be carried out on the Nelson Mandela, Booysens Road, Queen Elizabeth and Le Roux Avenue bridges. In addition,   R50-million has been allocated for the resurfacing of the M1 freeway, while R10-million will be spent on improvements to the M2 highway. Overall, R222-million will be spent this year on road resurfacing across the city.

Work is also underway on the Naledi Bridge in Soweto, to link the communities of Naledi and Protea. Pedestrian and vehicular bridges in Soweto prone to flooding, including the Jabulani/Molapo, Kinini-Leselinyala, Zulu, Mzilikazi, Kaalfontein, Klipspruit West, Slovo Park and Diepsloot bridges, will all be raised above the flood line.

A further nine bridges have been repaired and reconstructed at a cost R49.4 million after being damaged due to flooding last year. These include the culverts in Main Road in Riverbend Agricultural Holdings, Felstead Road in Northriding, Third Street in Chartwell, Watercombe Street in Farmall Agricultural Holdings, Niven Road in Douglasdale and Coleraine Drive in Sandton.

Work on bridges in Cornelius Road over the Klein Jukskei River in Weltevreden Park, Ballyclare Drive over the Braamfontein Spruit in Bryanston and the Riverside Road Bridge in Ivory Park was also carried out.

Tourist arrivals to South Africa grew by 10,5 percent in Q1