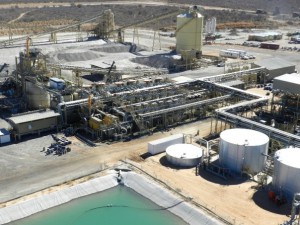 Discovery Metals, the owners of Boseto Copper Project in Botswana says it registered a record metal production of 1,952 tonnes of contained copper and 81,380 oz of contained silver during the month of June while copper production also increased by 14 %.

The company which is subject to a takeover noted that mining production (waste plus ore) for June 2013 was 2.98 Mt. “At the end of June blasted stocks (Ore + Waste) of 2.14 million tonnes were available for mining in the two open pits,” it said.

Average metallurgical recoveries of 87.4% of copper and 84% of silver were achieved for the month. Overall copper recovery is in line with expectations and silver recovery continues to outperform the original estimates.