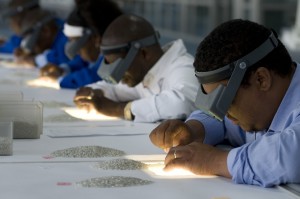 The De Beers Group of Companies has announced the addition of five new Sightholders for the remainder of the 2012-2015 Supplier of Choice (SoC) contract period. De Beers’ modified SoCre-planning process, announced in 2011, enables businesses that demonstrated sufficient demand through De Beers’ Auction Sales in 2012, to qualify for term contract supply and Sightholder status.

Sightholder status is subject to De Beers’ forecast rough diamond availability and the eligible applicant’s submission of a Contract Proposal Questionnaire (CPQ) as part of the 2013 ITO re-planning process. Each applicant for a SoC contract under the 2013 ITO re-planning process has been subject to the same rigorous and objective selection process as those applicants that applied for supply at the start of the 2012-2015 contract period in 2011. Additionally, all applicants are required to adhere to the De Beers Best Practice Principles, ensuring that, Sight holders are “living up to diamonds” by adopting clear ethical standards in their business practices.

In addition to the qualification of new Sightholders, the ITO re-planning process also provided opportunities for existing Sightholders to qualify for new rough diamond allocations as part of their 2013-2014 ITOs. The new allocations are subject to forecast availability and reflect Sightholders’ demonstrated demand for rough diamond categories outside their 2012-2013 ITOs.

Philippe Mellier, CEO of De Beers Group, said De Beers is proud to welcome five new businesses into the Sightholder community. “Our Sightholders represent the world’s leading diamantaires, and today’s announcement means that we will be better able to supply them with the right diamonds to support them in adding maximum value to our finite resource”.

Varda Shine, Executive Vice President, Global Sightholder Sales, added  that the introduction of dynamism into this contract period is a further evolution in our Supplier of Choice strategy, which provides a greater level of flexibility for Sightholders and enables De Beers’ distribution to be more efficient. “We look forward to building strong and productive partnerships with our new Sightholders.”