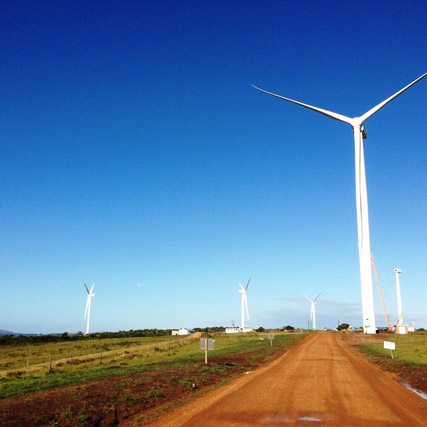 Standard Bank has been instrumental in funding more than 940MW of renewable energy as part of Eskom’s Renewable Energy Independent Power Producer Procurement Programme (REIPPP) initiated by government. Of these projects, three were connected to the Eskom grid in 2013 bringing 121.5MW of renewable energy production to the national grid. This is enough to power over 65,000 homes.

“The drive towards renewable energy is developing an entirely new energy market in South Africa, which requires both specialist skills as well as innovative funding models,” said Rentia van Tonder, Head of Renewables for Standard Bank.“Given that these projects are greenfield investments for a newly-created consortium with  own equity, we opted for a project finance model with a fairly long repayment term as the facility is effectively unsecured backed by a 20 year PPA supported by the SA government.”

The Standard Bank-funded wind farm project in South Africa’s Eastern Cape Province has become the first of Eskom’s REIPPP initiatives to reach financial close in late 2012 and begin successfully delivering power to the national grid in 2013.

The 27 megawatt (MW) MetroWind Van Stadens wind farm project, which was built at a total cost of R599 million, is projected to have a 20-year life span and deliver 80 000 megawatt hours of electricity a year to between 5 000 and 6 000 households in the Nelson Mandela Bay Metropolitan Municipality. Standard Bank concluded an agreement in October last year to provide R450 million in debt financing to a consortium comprising Basil Read Energy, Afri-Coast Engineers, Old Mutual, Spilled Water Renewable Energy and the Van Stadens Community Trust, for the construction of the project.

The wind farm consists of nine wind turbines situated in the Van Stadens and Blue Horizon Bay communities and will produce enough power to meet almost 50% of Nelson Mandela Bay’s target of generating 10% of electricity from renewable sources. This development will offset approximately 80 000 tons of carbon dioxide emissions a year as well as offset the use of 80 million litres of water that would have been used for power generation from coal fired power plants  in the process. The nearby settlements of Fitches Corner and Witteklip have already benefited from the project thanks to the installation of solar-powered street lights in their communities.

“While this is a landmark project for the development of sustainable wind-powered energy in South Africa, it is also an important contributor to social upliftment in the area.” said Ms van Tonder.

As lead arranger and underwriter of the transaction Standard Bank was able to call on its strategic relationship with Industrial and Commercial Bank of China (ICBC) for the provision of over R190 million for the project’s financing.

Standard Bank was also the sole mandated lead arranger and underwriter of both the Herbert and Kalkbult renewable energy projects in South Africa’s Northern Cape Province. Herbert is a 22 MW photovoltaic project that signed power purchase agreement with Eskom. It became fully operational on 7 April 2014 but has been producing early operating revenue since November 2013. Herbert is owned by AE-AMD Renewable Energy (Pty) Ltd, Old Mutual Ideas Fund, Tenesa, Exoport and the Herbert Educational Trust No 1, a local community trust. The construction of Herbert was completed on time with SunPower as the Contractor and module supplier. SunPower will also be responsible for the operations phase of Herbert.

The third commissioned plant, Kalkbult is a 72.5 MW photovoltaic power project that will produce clean energy that will also be sold to Eskom. The project, whose shareholders include Scatec Solar AS, Norfund, Old Mutual Ideas Fund, Stanlib, Simacel and the Kalkbult Local Community Trust, has been connected to the grid since September 2013 and will provide Eskom with up to 137,000,000kwh of power per annum, which is enough electricity to supply 33,500 households per annum. The Kalkbult project was one of the first renewable energy projects under REIPPP to connect to the grid and begin supplying clean energy to Eskom.