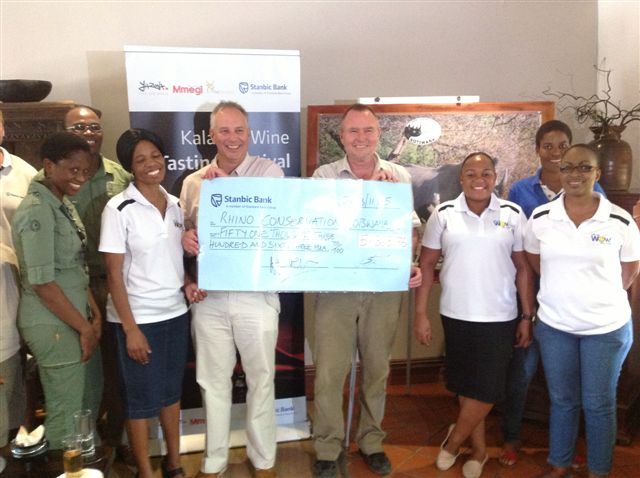 The donation comes as part of an ongoing commitment towards playing a socially relevant role within the community and working to support wildlife conservation in Botswana. The donation was received by the Board of Trustees of Rhino Conservation Botswana at Wilderness Safaris in Maun.

The funds were raised during the Kalahari Wine Tasting Festival held on 31 July and 1 August 2013. The event was sponsored by Stanbic Bank in association with Fine Brands, Yarona FM and Mmegi Newspaper. Kalahari Wine Tasting Festival aimed at encouraging a greater sense of networking between stakeholders, and this year added the CSI element through a wine auction and ticket sales.

“What began as a platform for rewarding, thanking and engaging with our valued clients and stakeholders, has since evolved into a platform for making a difference in our communities,” commented Mr. Tasha Ferreira, Stanbic Bank Head of Corporate and Investment Banking. “We value the work that Rhino Conservation Botswana has been doing to preserve our rhino population and wanted to lend assistance to this great cause. We want to encourage and actively support wildlife conservation and indeed appreciation for Botswana’s rhino population.”

Rhino Conservation Botswana is a non-profit organisation formed in 2013, with the Minister of Environment Wildlife and Tourism, the Honourable Tshekedi Khama, as its patron. The organisation aims to contribute to increasing the numbers of rhinos in Botswana. Its mandate is to train and equip rhino monitoring teams with information. The information collected by these teams has proven to be highly valuable to security agencies including the Botswana Defence Force and the Department of Wildlife and National Parks anti-poaching unit. .

Said Map Ives, Environmental Director, Wilderness Safaris, “We are extremely pleased to see local business getting involved in conservation and we encouraged others to do so as well.  This generous donation will go towards the development of a sophisticated monitoring system which is designed to help with the security of our rhino populations. Wildlife conservation is the backbone of our tourism industry.  It is in the interests of each individual and community, as well as industry and Government, to join hands in conserving our precious natural resources.”

Violence Has No Place In Our Business—Wilderness Safaris