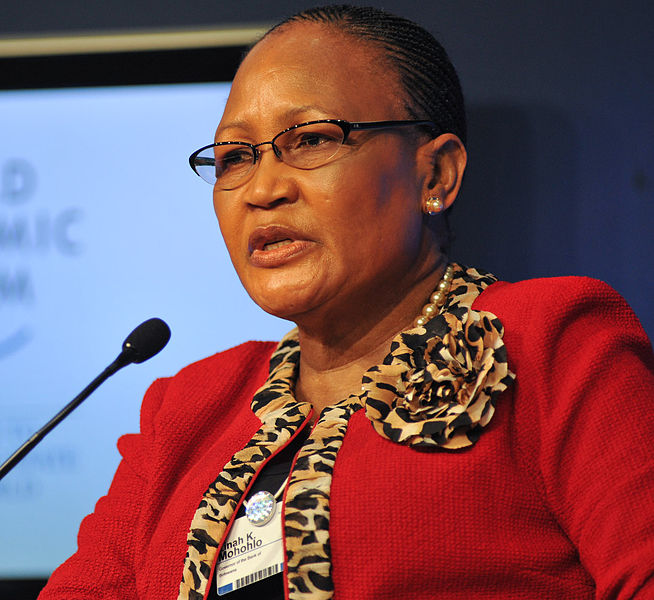 Bank of Botswana says its governor, Linah Mohohlo has returned from Washington DC in U.S where she participated in the Spring meetings of the International Monetary Fund (IMF) and World Bank in her capacity as Botswana’s representative on the non-executive Board of the IMF.

According to the bank, Mohohlo was accompanied by a delegation of bank senior staff adding that she took part in the meetings of the International Monetary and Financial Committee and the IMF’s Africa Group 1 Constituency (comprising 23 Sub-Saharan African Countries).

“The deliberations included recent economic and financial developments, prospects for global economic growth and related policy responses, as well as respective roles of the IMF and World Bank with respect to funding and other support,” stated Bank of Botswana.

“It was observed that the global economic outlook was characterised by uncertainty and modest global growth, in the context of low commodity prices, volatile financial markets, demographic changes and concerns about China’s transition to lower rates of economic growth. Notably global economic growth was at its lowest since 2009, while future growth has been revised downwards.”

The bank added that the contribution of advanced countries was muted, while emerging market and other developing economies (which have been the main drivers of economic activity since the financial/economic crisis) were experiencing a slowdown due to country-specific weaknesses and external factors, such as tightening financial conditions and capital flow reversals.

In her capacity as First Chair of the Africa Consultative Group, the Governor was a discussant at the Africa Group I Constituency meeting with the Managing Director of the IMF. The meeting deliberated on “Economic Prospects for Africa: Shocks and Policy Implications” and the Governor’s contribution focused on the impact of weather-related shocks on economic developments and conduct of macroeconomic policies. She also officiated a seminar on Climate Change: Policy Challenges for Small Middle Income Countries. The Governor had consultative bilateral meetings with relevant IMF Departments and related other institutions on matters of mutual interest.