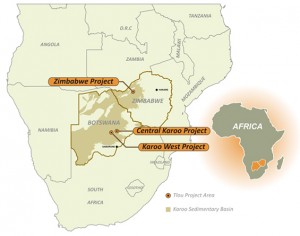 Tlou Energy Limited says the top-hole drilling operations on the Lesedi Horizontal Pilot Pod wells is progressing on schedule and nearing completion of this phase of the drilling program. The company says the Lesedi 1B well top-hole section was concluded at a depth of 180 m and the well temporarily suspended and the rig released from location at 11:30 hours on 17 June.

“With top-hole drilling nearing completion on the Pilot Pod Wells (Lesedi and Selemo), the surface casing pipe will then be run and cemented on all six (6) wells in a continuous program. Based on the current schedule, the larger Buffalo Rig for drilling the lateral well sections is expected to be mobilised to site in early July. DWD Drilling Technologies having been advised of the mobilisation date and have acknowledged the rig is ready to be moved when required,” revealed Tlou Energy.

It added that current drilling program comprises two horizontal pilot pods called Selemo and Lesedi. Each Pod has a single vertical well (Selemo 1P and Lesedi 1P) with each vertical well having two 750 m in-seam lateral wells drilled to intersect it through the targeted basal Morupule Coal Seam. For the Selemo Pod, the in-seam wells will be named Selemo 1A and Selemo 1B.

“This approach has proved to be successful in CBM basins in Queensland and will facilitate faster and more efficient dewatering and gas drainage of the targeted coal seam.  The top-hole section on each well will be drilled with a smaller Schramm T-130 Rig from DWD Drilling Technologies (“De Wet”). Subsequently, the lateral sections will be completed in a second drilling phase with the larger De Wet Buffalo Rig.”

“The entire drilling campaign of six wells is scheduled to be completed in 3Q13 with testing operations commencing in 4Q13 following well completions and installation of surface testing facilities.” Tlou Energy has been active in Botswana for over three years with approximately US$40 million having been invested on drilling and testing programmes to date by the company and the previous operator. The Karoo Central project is one of the most advanced CBM projects in southern Africa as a result of this investment.