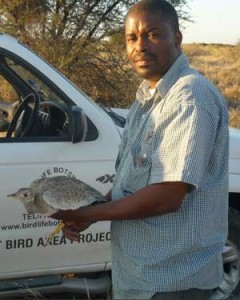 The UN climate talks crept into the early hours of Sunday morning this past weekend – more than 30 hours after the scheduled close – as Peruvian Environment Minister Pulgar Vidal begged governments to “give hope to the world”.

There was a degree of optimism heading into the Lima negotiations, with the world’s largest emitters – China, US, and Europe – communicating their emission reduction targets, and countries pledging a combined total of US$10 billion to the Green Climate Fund. Disappointingly, governments missed the opportunity to build on this momentum to lay a robust foundation for a global post-2020 agreement on climate change to be finalized in Paris next year, and to ramp up pre-2020 action on climate change.

“The agreement in Lima delivers the bare minimum”, said Harold Hester, BirdLife Botswana’s Chairman. “It keeps the Paris 2015 agreement within reach, but it hardly inspires confidence”.

“There are a number of fundamental issues that divide countries, including the provision of climate finance and support, respective responsibilities for emission reductions, and how to address loss and damage”, added Dr Kabelo Senyatso, BirdLife Botswana’s Director. “These issues will need to be resolved by Paris”.

Countries made progress on the possible elements for the Paris agreement, developing a shopping list that will be negotiated further in Geneva in February. However, only limited guidance emerged on the content of countries’ post 2020 climate action pledges – so called Intended Nationally Determined Contributions (INDCs) – which are to be communicated early next year.

What is concerning, however, is the lack of a robust assessment of the adequacy of INDCs in staying within the two degree limit and of the fairness and equity of each countries’ proposal. As Botswana develops its own climate change Policy, it will be particularly interesting to see the extent to which we commit to reducing our own emissions, which although currently low, will rise with the increased use of our coal reserves for power generation. Moreover, as a country, we would need to develop this target with transparency, both to local actors, and to interested and affected parties internationally. Globally, the resistance of some big polluters to an assessment of their INDC pledges undermines trust and credibility, and it would be critical that Botswana sets the right tone, as we would otherwise lose the moral ground to critique INDCs of other states on account of their fairness and equity.

Negotiations on the pre-2020 mitigation also fell below expectation. “To keep global warming below 2 degrees Celsius above pre-industrial levels, global emissions must peak before 2020”, said Dr Senyatso, “but we’re off target, and Lima did not deliver the scale of response necessary to put us back on track”.

Particularly disappointing was the failure of governments to agree upon a clear road map for scaling up finance to US$100 billion per year by 2020, which was pledged by developed countries. “There is an urgent need for more substantial and predictable financial flows to developing countries to enable them to adapt to climate change and put forward their own mitigation contributions”, according to Harold Hester.

On a positive note, there is enough in the Lima Call for Climate Action for land use, land use change and forestry (LULUCF) and REDD+ to be included in country’s pledges and in short term mitigation ambition. Of notable mention here are several on-going and planned Sustainable Land Management (SLM) projects, led by the Department of Forestry and Range Resources (DFRR) in Ngamiland and the Makgadikgadi (the latter implemented jointly with BirdLife Botswana). More partners should come on board, especially corporate with high carbon dioxide emissions, so that they can use these SLM projects to offset some of their impacts. However, an important decision on REDD+ safeguards information systems (SIS) was put off until next year, running the risk that REDD+ compromises biodiversity and human rights, and that investor confidence is undermined.

“We’re not moving fast enough on climate change – already we are seeing the impacts of climate damage on the most vulnerable communities, species and ecosystems, including here in Botswana”, said Dr Senyatso. “Yes, there is incremental progress, but what we need is a rapid and fundamental shift towards low carbon, climate resilient economies. Governments will need to take bold and urgent action over the next 12 months to ensure an effective and equitable 2015 agreement”. We urge the Botswana government to take a strong lead on this matter by quickly finalizing the Climate Change Policy, and then supporting local actors working to ensure that climate change impacts on humans and livelihoods are kept at a bare minimum. Only then could we be in a position to engage internationally, knowing that at national level, “all our ducks are in a row”.