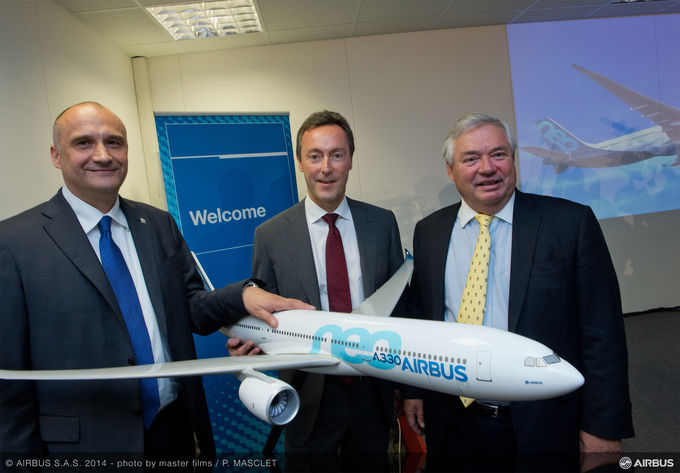 The highly-anticipated launch of Airbus’ latest enhancement to its medium-range widebody A330 Family has occurred, with details provided during a standing-room only press conference at the Farnborough Airport.

As the latest evolution in Airbus’ comprehensive market-leading widebody product line, the A330neo programme comprises two versions – the A330-800neo and A330-900neo – which incorporate new Rolls-Royce Trent 7000 engines, along with aerodynamic improvements and the latest in the company’s cabin technology to provide unmatched operating economics.

“We worked out a solution that keeps the maturity, keeps the simplicity, keeps all that the customers like about the A330 Family – and on top improves the fuel-burn per seat by 14 per cent,” said Airbus President and Chief Executive Officer Fabrice Brégier, who noted that Airbus anticipates selling 1,000 A330neo aircraft.

In addition to the fuel-burn reduction, A330neo operators will benefit from up to 400 nautical miles of additional range, along with decreased maintenance costs compared to in-production A330 versions. Airbus’ has also further optimised the cabin – allowing for up to 10 more seats on the A330-900neo and six additional seats for the A330-800neo version – while maintaining the company’s spacious 18-inch-wide seat comfort standard in economy class.

With this increased seating, the A330-900neo will offer seating capacity for up to 310 passengers, with the shorter-fuselage A330-800neo accommodating up to 252 travellers.

Drawing on the Airbus family aircraft concept, the A330neo shares more than 95 per cent spares commonality with existing A330 jetliners – while also taking advantage of the latest technology from across the company’s modern and efficient product line. These enhancements include new A350 XWB style winglets, 3.7 metres of additional wingspan – which still meets Category E airport requirements – and new engine pylons for four per cent aerodynamic improvements, and cabin innovations such as full-LED mood lighting and Wifi connectivity to deliver superior passenger comfort.

Airbus also will draw on lessons learned from the successful development of the single-aisle new engine option A320neo, planning an ambitious 42-month programme for the A330neo jetliner from its launch to the targeted first A330neo delivery in the fourth quarter of 2017.

“The A330 jetliner family offers a very, very solid base to build on,” said John Leahy, Airbus’ Chief Operating Officer – Customers, citing the significant demand over the next 20 years for aircraft in this category with operators that are currently flying A330s. “These are people who love the A330, are making a lot of money with A330 and have their pilots trained with the A330, but would like to have more fuel efficiency – that’s exactly what we are doing with this aircraft.” (Source: http://www.airbus.com)