The Cross Okavango Delta Expedition, led by Thalefang Charles and supported by Botswana Tourism Organisation (BTO) will be embarking on a second expedition across the Okavango Delta from Seronga to Maun by mekoro (dugout canoes) from July 23 to August 8, 2016. 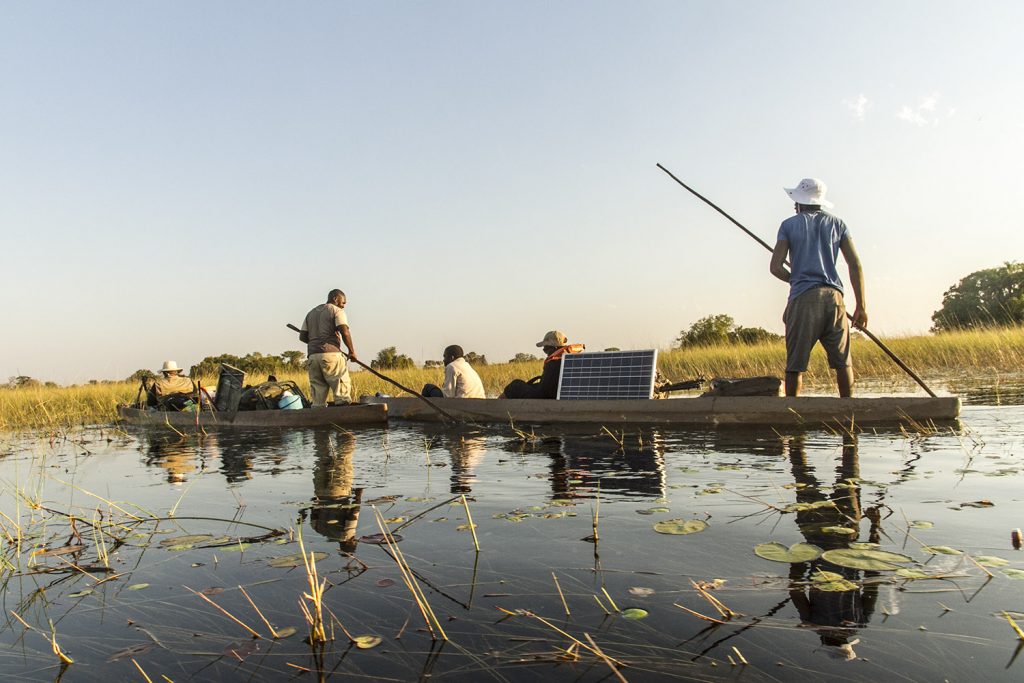 This year, the expedition will travel with various local artists (musicians, poet, and painter, photographers) in order to inspire them to create artworks based on their Delta crossing experience.

The artworks would form part of the celebratory artworks by Batswana on the country’s 50th independence Celebrations and presented at an Okavango Delta Art Exhibition event organised by the BTO in September.

The aim of the project is to promote conservation, share the Okavango Delta with Batswana, promote tourism and the arts, as well as to celebrate Botswana’s golden jubilee.

Expedition Team includes: 1. Monaga Stiger Sola Molefi. Stika Sola is a legendary guitarist from Maun where he is also based. 2. HT Musician – Kealeboga Mabua, a.k.a. HT or Tautona is hip-hop artist from Maun but is based in Gaborone. 3. Leshie Lovesong. Lesego Nchunga known as Leshie Lovesong is a renowned poet and singer, based in Gaborone. She is originally from the Chobe area.4. Abel Makondo Painter – Abel Makondo was born and bred in Maun. He is a painter and currently teaching Art on part-time in Maun. It would be his first time into the heart of the Okavango Delta.5.Pako Lesejane, photographer – was part of the trailblazing team that crossed the delta in 2015.6. Thalefang Charles, Writer/Photographer and leader of the expedition.

The team will also partner with The Conservation Music Project, which is a brainchild of Alex Paullin from U.S. who has been following traditional music from around the Delta to promote conservation. Paullin will work with musicians to produce music inspired by the Delta for the Delta.

The team is expected to travel with expert Bayeipolers from Seronga and Jao Flats who would be leading them through the ancient routes of their great grandfathers across the Okavango Delta. A film crew would also be following the expedition to produce a television documentary for the project. Crossing the Delta on mokoro has been dubbed “Botswana’s ultimate travel experience” and tops among the coveted travel lists of travel experiences around the world.

Expedition Leader, Thalefang Charles said Batswana do not know The Okavango Delta and this is his little effort to teach Batswana about the Okavango Delta. He said with the trip he hopes to inspire artists to describe this amazing place or describe themselves with this place.

“I hope they too would share the Okavango Delta with Batswana and the world. I believe after 50 years of independence it is about time we tell our own stories about our places,” Charles said.

“The Okavango Delta has inspired many foreign artists, photographers and this expedition aims to use the Okavango Delta to inspire Botswana talent while spreading the conservation message and celebrating Botswana,” he added.

“The expedition will certainly provide an opportunity for the world to appreciate it even more with the envisaged song and art productions that are part of the expedition.  This is part of the continuation of BTO’S ‘’Explore Your Campaign which we believe resonates with the golden jubilee celebrations.’’