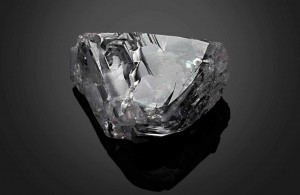 Gem Diamonds Limited has released a Trading Update for the fourth quarter period 1 October 2012 to 31 December 2012.
Gem Diamonds’ CEO, Clifford Elphick says the company has continued to see a strong operational performance in the fourth quarter at Letšeng, in line with expectations.
“The fourth quarter of 2012 saw a continued strong operational performance with carats recovered increasing over the prior period. The Company also saw a steadying of diamond prices at the three Letšeng tenders held in the period. As we move into 2013, the market appears to be seeing a positive improvement over Q4 2012,” Elphick notes.
According to the update, Letšeng mine in Lesotho achieved an average value of US$1 703 per carat was achieved for the 3 exports during the Period (US$1 673 per carat in Q3 2012 and US$2 542 per carat in Q4 2011).
About 10 rough diamonds achieved a value in excess of US$1 million each in the Period (10 in Q3 2012 and 10 in Q4 2011), a total of 39 for the full year 2012 while 31 rough diamonds achieved prices greater than US$20 000 per carat in the Period (34 in Q3 2012 and 46 in Q4 2011).
Gem Diamonds says a total of 171 rough diamonds greater than 10.8 carats in size were recovered in the Period (180 in Q3 2012 and 168 in Q4 2011) totalling 647 and contributing 73% of Letšeng’s production value for the year.
The company says operational improvements to reduce diamond breakage underway.
“Good progress with procurement of secondary crushers for use in Plants 1 and 2, which are on target for installation by the end of Q2 2013,” says the company.
At Ellendale, the sale of the mine to Goodrich Resources Limited was completed on 31 January 2013 for a total consideration of AUD14.4 million.
At Ghaghoo mine in Botswana, the company has reported a steady progress in the development of the sand portion of the decline tunnel, with approximately 40% complete as at end of Q4 2012. Construction of the Plant is substantially complete.
At the group level, there was tragically one non-mining fatality occurred at Letšeng on 15 December 2012 and 8 Lost Time Injuries (LTIs) have occurred in the Group for the year to date. Zero major stakeholder and environmental incidents have occurred year to date.
Gem Diamonds currently has US$73.0 million cash as at 31 December 2012, of which US$67.0 million is attributable to Gem Diamonds.
In addition to the M250 million (US$29.5 million) 3-year unsecured revolving credit facility at Letšeng, Gem Diamonds has concluded and signed a US$20 million 3-year unsecured revolving credit facility with Nedbank Capital (a division of Nedbank Ltd), which is available for draw-down.
As at the 31 December 2012, M25 million (US$3 million) of the Letšeng facility was drawn down and subsequently repaid in January. As at the date of this Trading Update, no amounts are drawn down under either facility.
“We continue to look at ways to enhance and optimize our portfolio of assets and as such are pleased to have concluded the disposal of Ellendale, allowing us to focus on our core assets. This will enable the Company to focus both capital and management resources on these assets, as we look to realise value from the world class Letšeng mine and our development project, Ghaghoo. Project Kholo remains a priority for Gem diamonds and we continue to proceed with selected critical path items ensuring that we are able to effectively accelerate progress at Letšeng when we see a sustained improvement in the global economy,” Elphick says.

“Regrettably, a non-mining fatal accident occurred at Letšeng in December 2012. A full investigation into this accident was conducted and our deepest condolences go to the family of the deceased.”