Minergy Limited will list a coal company in Botswana in the first half of the year that will aid job creation in Botswana, supply the regional coal market with high grade product and potentially take advantage of the buoyant international coal markets. 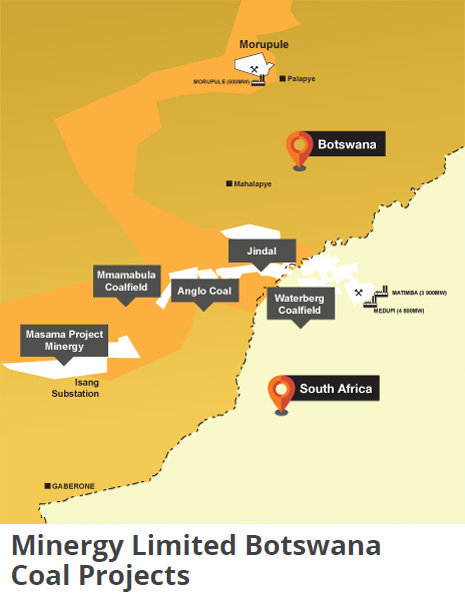 In the initial capital raising before the listing of Minergy’s exciting Masama coal project, BWP70 million was raised by means of a private placement with selected investors. A further placement is planned for March 2017 as part of the Botswana Stock Exchange listing process. The company has further plans to list on the JSE in the latter half of 2017.

The coal project is located in south western corner of Botswana’s Mmamabula coalfield and can be mined at low cost and low risk. The resource is near to existing rail, road and water infrastructure, and has significant distance advantages over existing competing suppliers to regional customers.

Andre Boje, CEO of Minergy, says with the resource of 337 Mt high quality coal covering 120km2 , this project offers great potential for the Southern African region and possibly the export market “As many primary producers of coal in the region turn their attention to the buoyant export markets, it leaves a gap for smaller producers to exploit.” The project boasts significant locational advantages and in some instances is closer to the South African coal consumers that certain coal fields within South Africa.

The size of the resource also supports scalable production, presenting an opportunity to provide export coal to traders who supply India, Asia, China and Europe should international coal pricing remain at current levels. “A number of traders have engaged Minergy recently with a view to enter into off-take agreements and in some instances, provide funding to the project,” says Boje. “It is at this stage however, a little premature to enter into any agreements,” Boje went on to highlight. A recent development is that Transnet Freight Rail (“TFR”) have Botswana in their sights as a means of boosting traffic on their coal line.”

Initially however, the Masama project will focus on targeting coal supply into Botswana as well as regional industrial customers and Independent Power Producers (IPPs).

Boje, founder and former CEO of Wescoal, who has many years of experience in the coal mining and trading industry says coal will remain the dominant energy resource for the foreseeable future, and foresees conventional coal-fired power providers working with renewable-energy power providers.

Management is confident that they are able to differentiate the project and service from what is currently available in the regional market. “Minergy has been in discussions with potential customers and coal traders for offtake in South Africa. This project offers great potential for the Southern African region,” said Boje.

The management team at Minergy has the necessary proven capabilities and expertise to ensure a successful company is built around the resource. Complete corporate structures with a functioning board, including local representation, executive management, an operations manager and a local full time manager are all in place.

The international price of thermal coal has experienced a recovery from its low levels and is now trading in excess of $80 per ton, up from $49 a year ago. This bodes well for continued strength in international and regional pricing. Minergy’s low cost competitive advantage is cemented through coal seams which are shallow, with extraction through opencast method at low strip ratios which will more than make up for any logistics disadvantages it may have.

The listing and capital raising is taking place, in order for Minergy to raise capital to bring the resource into production. “We expect that all Environmental Impact Assessments, feasibility studies and the approval of our mining licence will be in place by the first quarter of 2018,” Boje indicated. He went onto indicate management’s commitment to the payment of dividends from the 2020 financial year onwards, provided it is a prudent strategy in terms of cash generated and that production will commence in 2018 as planned.

With the project being located in Botswana, management has appointed local managers and board members and job creation in Botswana will be significant. In addition, the listing on the Botswana Stock Exchange means that the people of Botswana will have another option into which to invest directly. “We estimate that the total investment of the project will be in the region of BWP200 million,” says Boje.

“We are excited about being able to bring a project such as Masama into production as it benefits Botswana directly as well as the Southern African region,” said Boje. “I have always been an advocate for coal power, it remains inexpensive compared to other energy sources and world-wide demand for the commodity remains high, given population demographics in fast growing countries and regions such as India, Asia and China as well as within our own continent, which is where our geographic focus will initially lie.”