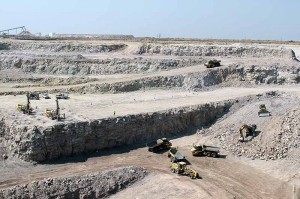 Lucara Diamond Corp, the Botswana Stock Exchange listed company has provided a revised operating performance outlook for 2013. The company said its Karowe Mine is projected to process 2.5 million tonnes and the company is forecasting diamond sales of 420,000 carats in 2013, an increase of 5% from previous guidance.

It added that the group is forecasting revenues of around $118 million with five sales planned for the remainder of the year, excluding the potential for a second large stone tender with viewings in both Gaborone and Antwerp.

Lucara noted that Karowe’s operating cash costs are expected to be in the order of $23 per tonne treated, in-line with previous guidance. Equally, the company revealed that waste will be stripped to access ore in the Centre and South Lobes during the final half of the year, which will provide access to deeper ore benches in the North Lobe. “The scheduled strip ratio for the year is 2.2 which is in line with previous expectations.”

At the sametime, capital expenditures for 2013 are expected to be approximately $5m, an increase from previous guidance of $3m, which is to fund advanced work on the Company’s tailings dam and securing the company’s water resources through the installation of additional boreholes.

William Lamb, President and CEO of Lucara observed that the company has had an exceptional start to 2013 with the recovery of large and exceptional diamonds resulting in the company’s first large stone tender achieving gross revenues of $24.8 million and the sale of its second blue stone for $1.6 million.

“Lucara continues its solid operating performance and has revised its operating cost and production guidance. The additional cash flows from the large stone tender will result in the strengthening of the Company’s balance sheet as it expects to reduce its debt by meeting all of its debenture repayment obligations of $33.3 million by the end of the year,” he said.

Lucara Diamond new Chief Operating Officer to be based in Gaborone

Lucara ends year on record diamond sales from Karowe mine