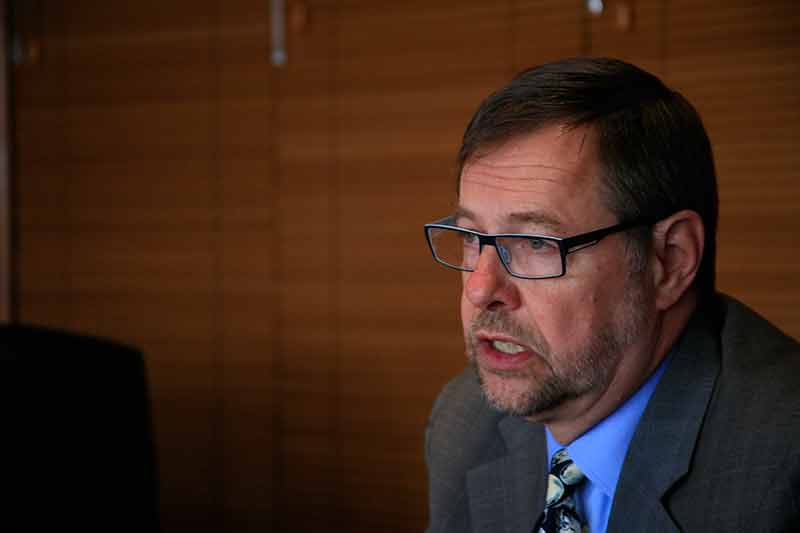 The Managing Director of Debswana Diamond Company, Jim Gowans, has launched and presented the 2012 Report to Stakeholders. The event which was graced by other senior officials of the diamond mining outfit, took place at the company’s Corporate Centre in Gaborone on the 9th October 2013.

The Report to Stakeholders is an annual publication created to give an overview of the company performance, activities which took place during the previous year as well as future plans to relevant stakeholders. Debswana used to produce an annual review document until 2010, when it turned the document into sustainability reporting.

“This has now become the Report to Stakeholders which aims to share the on-going journey of sustainable mining and show how we will continue to perform optimally for all our stakeholders, employees and Batswana,” Gowans pointed out.

According to the company, which is owned 50/50 by Botswana government and De Beers, 2012 was a year of many challenges although it managed to pull together and maintain profitability.

“It can be said that 2012 was one of the company’s most difficult years, but with effective strategic planning and the dedication of our employees we managed to produce results that any diamond company would be pleased to present,” the MD added.

Debswana said a total of 20,216, 000 carats were produced across all mining operations despite reduced output from Jwaneng due to the slope failure incident in which our colleague tragically lost his life. In order to step up efforts to reduce incidents in the company, a ‘near-hit’ reporting system was implemented at all its operations during the year under review and it has shown a significant reduction in the number of accidents and incidents across all operations.

The company said it aims to reduce its impact on the environment by placing special care to managing resources; so far it has made efforts to ensure that 27% of the water used in its processes is from recycled water sources.

As part of Debswana’s commitment to its employees, training forms a large component of the yearly budget. For the year under review, P88.7 million was spent on training employees, up 52.9% from 2011. This training goes hand in hand with the High Performance Organisation strategy which the Company is working towards.

Spend on people was not only limited to employees of Debswana, as the Corporate Social Investment and Community Development spend for the year 2012 stood at around P133.6 million. Major projects included sponsorship of the Botswana Football Association First Division League to the tune of P2 million.

During the year under review, Debswana remained steadfast in its promise to procure locally by spending P521 million on citizen owned companies. This draws from the fact that Debswana is committed to growing the economy of Botswana.

The major projects at Debswana in 2012 were undoubtedly the Morupule Coal Mine Expansion, Cut 8 and the Modular Tailings Treatment Plant in Jwaneng. All three projects have been delivered within budget in 2012, signaling a great start to three large projects aimed at improving and optimising the performance of the company.

This is in line with the High Performance Organisation strategy which has shown improvements across key performance indicators in mining, treatment, maintenance and supply chain areas.

“It is heartening to know that Debswana in all its manifestations remained strong in a challenging global economic climate. This took place through hard work, the selfless living of company values and a sustained belief in our country’s potential,” Gowans revealed.