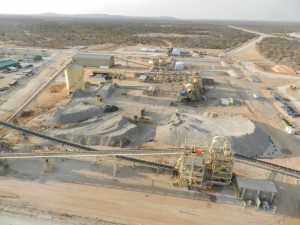 Discovery Metals says the milling of ore at the Boseto copper project in Botswana recommenced this week following the temporary interruption that was caused by failure of a bearing in the ball mill gearbox.

Further details will be provided in the December Boseto Commissioning Update which will be published next week.

Discovery Metals Limited also resumed normal development of the Zeta open pit at the Boseto in December after the Department of Mines at the ministry of Minerals, Energy and Water Resources accepted the company’s geotechnical report and lifted temporary restrictions preventing deepening of the pit.

In the period since the restriction was imposed in late November, which was the result of a small localised failure of a section of an interim hanging wall, mining has focused on advancing development of the higher benches and ore has been fed to the mill from these higher benches and from stockpiles.

“With the resumption of normal pit development, mining of sulphide ores at the base of the pit may recommence, enabling supply of higher grade material to the mill,” the company says.

As advised in the November commissioning update, the Boseto concentrator has demonstrated that it can operate at, or above, its daily design throughput rate, so the focus of activity is now on improving supply of ore to the mill.

A number of initiatives are being progressed to lift mine production and recover lost development time.

These include improved hiring and training of operators and maintenance personnel, early development of the Plutus open pit, procurement of larger capacity mining equipment and use of additional hired mining fleet to accelerate pit development. The Company continues to aim to achieve design mining rates in January.

Discovery Metals continues ramp up of Boseto copper mine