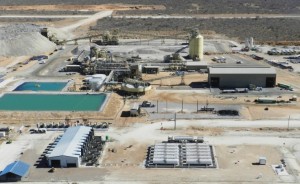 Discovery Metals said it has commenced the calling of bids from interested parties and has signed Confidentiality Agreements with a number of parties to date in a bid to evaluate whether a change of control transaction, on terms that the Board would recommend, can be secured.

The company which intends to lift voluntary suspension on the BSE/ AUX said some of these parties have commenced their due diligence investigations. The company has engaged UBS AG, Australia Branch and Credit Suisse (Australia) Limited as its financial advisers in connection with the process.

Cathay Fortune Corp (CFC), its previous suitor and majority shareholder (13.7%) has subsequent to its announcement that it believed the company should be sold, has sent a proposal to the Discovery Metals which may result in a new takeover offer.

“The proposal is indicative, conditional and subject to a due diligence review. A copy of the CFC proposal is attached to this announcement and has been released after taking legal advice.”

The price range proposed by CFC is $0.35-$0.40 per share. In subsequent correspondence, CFC has confirmed that, if it does make an offer, the offer will not be less than $0.35 per share.

The company has signed a Confidentiality Agreement with CFC and CFC has commenced its due diligence. CFC proposes to make a decision on whether to proceed or not with a takeover offer after the due diligence period.

“There is no certainty that CFC will make any bid for the company’s shares following its due diligence. Shareholders are advised that CFC cannot formally dispatch a takeover offer in the indicated price range until 16 June 2013 due to provisions of the Corporations Act, unless it obtains a waiver from ASIC. Nothing prevents CFC from announcing its intention to make an offer in the indicated price range at any stage,” Discovery said.

It added that other than providing the above details on the CFC proposal, Discovery Metals’ current intention is not to disclose developments with respect to the process unless and until the Board has approved a specific proposal or otherwise determines that disclosure is necessary or appropriate.

Discovery Metals began commissioning its Boseto Copper Project in Botswana in June 2012. Commissioning of the process plant, infrastructure and facilities was completed in 2012.

As previously reported, ramp up of the mining operation has taken longer than expected, with the waste removal operation affected by rain and drill performance, particularly in the March 2013 quarter. Ore availability was restricted by this waste removal deficiency and by a higher proportion of oxide ore than was expected in the December 2012 quarter.

As a result of these two matters, some 400kt of millable ore, equating to approximately $25m of revenue, was lost from the Company’s plan in the first 9 months of FY13. Boseto achieved its target material movement rate in April and the mining operation is at its design targets in all areas except ore availability. Ore availability is expected to reach its design target in June 2013.

In September 2012, Discovery Metals announced its intention to refinance the Project Finance (PF) facility, which was obtained in 2011/2012 to build the Boseto Copper Project, with a $200m-250m bond. The refinancing was to be used to repay the PF facility, thereby removing the requirement to make principal repayments during the next two years. Residual funds from the refinancing and retained positive project cash flows were to be used to develop the Zeta Underground mine.

“In order to maximise the prospects of a successful bond offering, the company considered an equity raising via an underwritten placement and accelerated rights issue in the week commencing 22 April 2013. As part of this process, the company’s largest shareholder, Cathay Fortune Corporation (CFC) which owns 13.7% of Discovery Metals and which has previously made a takeover offer for the company, was approached,” said Discovery Metals.

“CFC declined to participate and subsequently announced in a public letter to shareholders that it would not support the raising of equity, preferring that the company should be sold via a competitive process in which it would participate. At the same time and subsequently, the Company received interest in a range of corporate transactions from other parties.”

Then as s a result, Discovery Metals has decided to go through a formal process of engaging with interested parties, including CFC, to evaluate whether a change of control transaction, on terms that the Board would recommend, can be secured.

D-Day looms for Discovery Metals as talks with suitors continue