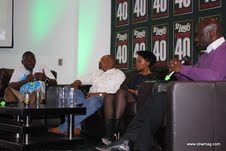 St Louis Export Top 40 Under 40, Thursday, 5 September 2013, hosted the third installment of the Crystal Chats series, held at Lansmore Masa Square. The theme of this event was ‘Paving the way for the next 40’, sharing ideas on how we can cultivate the new set of catalysts in our nation. The campaign so far has unearthed talented and inspiring young individuals and the aim of St Louis Export is to continue to reveal the doers of our communities.

The Crystal Chats have followed a talk show format where chosen guests will be speaking to the host and answer questions about their industries, careers and them as people in front of a live audience. This kind of engagement is unique as it invites comment and questions that come from audience members and those following the event live on Twitter on the hashtag #CrystalChats.

KBL’s Premium Beer Marketing Manager Ms. Amakura Erbynn said, “The first and second Crystal Chats were an enormous success and has piqued the interest of many Batswana and we hope to build on more of that success with subsequent Crystal Chats. With our third instalment we are fortunate to have such inspiring people on our panel.”

The guests for this chat included Lepang Ferguson, a star who is shaping the design industry in Botswana. Her daily inspirations and contributions at the Ideas Expo have made her permanent fixture in the branding and advertising realm. 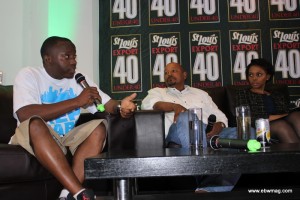 The second was none other than St Louis Export Top 40 Under 40 Judge, Mr Solomon Monyame, popularly known as Solo B. He has laid the foundations for artists to fully benefit from their craft through COSBOTS as the founder and current President of the organisation. He worked as a Presenter at Radio Botswana 2 soon after it was officially launched. Together with others, he formed he first pop group in Botswana, Tribal Monks.

Molf Nkwete, also a catalyst, was the final speaker of the night. He gave an interesting story of his journey into entrepreneurship, starting out as a student and funding his business with his monthly stipend to the chain of stores in Gaborone and Johannesburg’s super malls called Mafia Soul. He has paved the way for many young Batswana, showing them that money and funding should not stop you from achieving your dreams.

With such a prestigious and celebrated panel, there proved to be a great deal of knowledge and experience in one room, offering the perfect sounding board for which future catalysts and indeed the next generation of Top 40 Under 40 can seek inspiration. Audience members engaged freely with the guests, having access to the people who have inspired and spawned a new generation of catalysts.